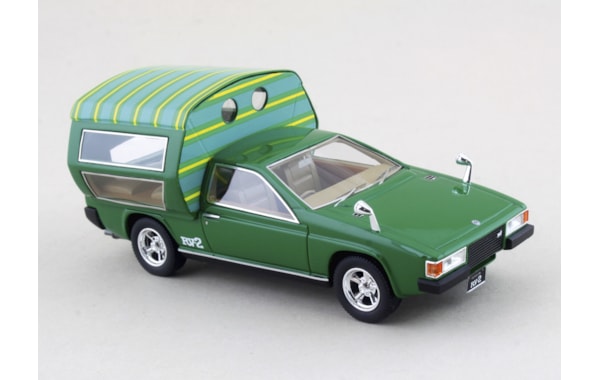 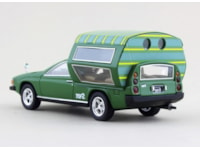 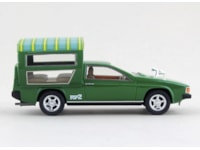 First presented by Toyota at exhibition halls in 1972 and 1973, the RV-2 is a very unusual interpretation of a camper vehicle.

The exhibition areas of the Japanese manufacturer at the Tokyo Motor Show in October 1972, at the Dutch RAI fair in February 1973, and at the New York international Auto Show in April 1973 featured a passenger car that at the front looked like a very sporty, flat-designed and, above all, long-drawn out estate car. With a total length of 4.73 metres, the visual impression was quite consistent with the actual dimensions. At the rear of the vehicle, two elongated windows allowed a view into the interior. Windows of the same size could be also found on the roof of the car. The coup that these large windows served was only recognisable when the two side parts after the front seats were folded up towards the side just above the wheel housings and hinged aside. The now upwardly open space could be covered with a matching cloth so that a well-ventilated tent was formed on the chassis of the Toyota.

It was clear very quickly to the crowd that this type of fully integrated camping facility in a passenger car had never before been seen in this form. But this was only the external conversion of the passenger car to a camper. Once folded up and hinged aside two fully-grown adults could lay down in the rear, and two extra beds for the night were provided via the complete folding down of the two front seats. It was also possible to fit a table in the rear area and last, but not least, the seats and the table could also be removed from the car. As a further finesse, the rear door, which could be folded out and downwards, served as a great device for easy entry and exit of the car. To the disappointment of many visitors, the exhibited, fully functional camper and estate car never received the company's blessing to go into production.

Exhibited under the designation "RV-2" at the fairs, the car was an optical mixture of Toyota's Mark II and Crown, and was larger than its predecessor, RV-1, that had been based on the company's Celica, and was exhibited in 1971.

AutoCult is legendary for recreating unusual one-off vehicles, so the RV-2 is an obvious fit for this prolific resincast manufacturer's portfolio. The attention to detail is excellent, and finish is always very good indeed - a reputation that has been well-earned over the five years of the company's existence.

With plenty of 'glass' area about it, the RV-2's interior can be fully appreciated, something that AutoCult has exploited to the full. It's another truly exquisite release.