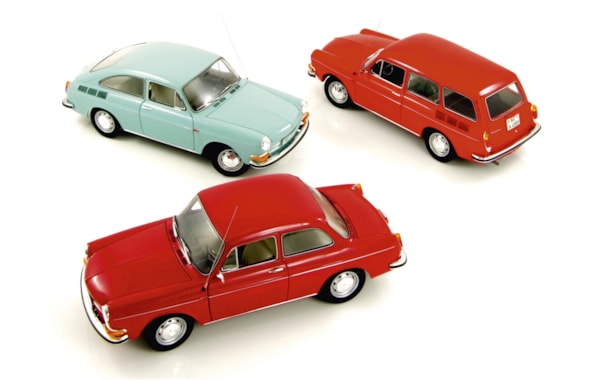 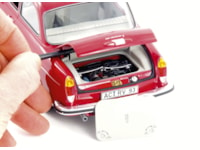 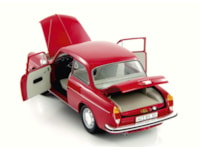 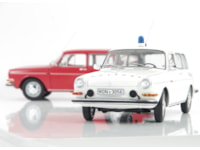 In the face of so many amazing new releases, it is very easy to be distracted from models released in the past that still robustly hold their own. We take a trip back to models released nearly 20 years ago...

When it comes to authenticity in scale models I feel that there are two dimensions - first, the factual correctness and then the emotional connection. The latter has esoteric connotations, which are usually triggered by us having cherished experiences - either through ownership or a deep marque affinity. Of course the degree to which any model appeals to us is often intrinsically influenced by such emotional connections.

So, what I think is a perfect illustration of this train of thought is, at the same time, also the fact that, on occasion, diecast models can equal (or better) the level of detailing that we have come to expect in 1/18 from the high-end resincast sector.

Typecast
Volkswagen’s third European model range, following the Beetle (Type 1) and the Transporter (Type 2), was launched at the IAA (Frankfurt Motor Show) 1961 as the VW 1500 (Type 3) passenger car range. Initially, the range comprised of a Stufenheck (saloon/notchback) and a Variant (estate car/squareback, which also came in commercial guise with the glass of the rear side windows replaced by sheet steel as a panel van).

Flagship models to the range were intended to have been the Type 3 ‘Razor Edge’ Karmann Ghia, both as a coupé and cabriolet, with a third Karmann-built model of a cabriolet based on the notchback. All were introduced with rear-mounted, flat four, 1500cc air-cooled engines consistent with the engineering style of their stablemates of the era. Despite Volkswagen’s best intentions (and a couple of years of brochure publicity), the two cabriolet versions sadly never reached series production.

The Type 3 range was supplemented for the 1966 model year by the VW 1600 TL Fließheck (fastback) with the TL designation denoting “Touren-Limousine”. With that additional version came the increasing use of 1600cc engines for the Type 3 range, firstly in conjunction with the 1500cc units and then ultimately as the sole option fed by either carburettor and electronic fuel injection set-ups. An essentially similar, but somewhat differently-styled, range of VW Type 3 models was developed and produced in Brazil - but they are a story for another day.

Successive model year changes of the European VW Type 3 passenger car models saw only modest external changes until the noticeable update introduced in August 1969, for the 1970 VW model year. Influenced by North American legislative type approval requirements, the updated Type 3s are easily recognised by the larger, squared-section, bumpers as first fitted to the Beetles two years earlier. The other main visible changes comprised a sharper line to the front bonnet (to marginally enlarge carrying capacity) and larger front indicator lights, enabling the incorporation of side marker lights on export models bound for North America. Tail lamps were enlarged at the same time to incorporate reversing light lenses in the cluster.

Of those final four years, cars from the 1970 and 1971 VW model years are recognisable by steering wheels with a central boss and chromed-metal horn ring. Cars from the final two years of production are easily recognisable by their large flat, four-spoked, black plastic steering wheel pad. Over those four years, however, Volkswagen was indulging in some visibly noticeable changes in the standard range of paint colours, with hues that got brighter and brighter towards the mid-1970s.

The Minichamps take
When the Minichamps 1/43 range was rolled out onto the market, it brought with it quite a number of subjects that were previously unmodelled - and in a range of increasing paint colour variations. Many of these appeared, outwardly, to replicate authentic manufacturer’s finishes and included representation of the 1960s style VW Type 3. Minichamps’ position in the marketplace was reinforced by its entry into the growing 1/18 sector and included all three of the 1970, updated style, VW Type 3 passenger cars. I clearly remember their release - and being particularly impressed by them.

What shook me, though, when doing the background research for this Spotlight, was just how many years ago those releases were! The perception of that being “recently” quickly dissolved in the face of checking back to the Minichamps website to find the first release was no less than nineteen years ago in 2002!

Delight is in the detail
It is often said that the devil is in the detail. Here, though, it is also the case that delight is in there too, because so much of the fine detail included in the modelling of all three releases push the emotional buttons in me. The small details triggered memories of owning cars having those fittings that were deeply marque idiosyncratic. Admittedly this was an emotional affinity connection that endeared the models to me but even without it, and at the less intense factually authentic level, the modelling is, substantially, perfect. That is a caveat on which I will elaborate further later.

Of course it is impossible to achieve a high authenticity score without an appropriate finesse of modelling to portray them. Taking a close look at all three of Minichamps’ 1/18 VW Type 3s reminded me of just how well all that was accomplished - almost two decades ago.

Let’s go straight to the back - and the engine compartments. Unlike the Beetle, VW’s Type 3 passenger car versions boasted the traditional VW luggage space under the front bonnet, doubled-up with a rear luggage compartment in the boot. This was possible thanks to Volkswagen making the Type 3’s flat-four engine flatter than the Beetles by, amongst other things, changing the design of the oil cooling fan and its shrouding. Service access to that engine was provided by a secured, sound- insulated, metal panel in the boot floor, covered by rubber matting. The locking handles either side of the access panel were very clearly labelled with open/close instructions and direction arrows.

Minichamps’ modelling of all this was, it has to be said, exquisite. When open, the respective boot lids/tailgate also reveal the oil top-up filler cap and latch point, so familiar to anyone who has owned a Type 3. The representation of the rubber seal surround to the boot (and bonnet) is also very convincing. Moving to the bonnet compartment, of a style common to Notchback, Fastback and Variant alike, reveals correctly stowed spare wheel and jack, brake fluid reservoir and screen wash reservoir, all similarly very well replicated.

But for me it was the inclusion of the little silver data sticker adjacent to the bonnet latching point that is the icing on the cake. That style of sticker was absolutely marque-typical across the whole Volkswagen range and instantly recognisable by anyone who has owned a VW from that era. So many of the other details incorporated in the modelling of those three Type 3 versions are similarly both authentic and resonatingly evocative. One that I particularly liked was Minichamps’ introduction of variation to the interiors by fitting the Fastback with factory option ‘tombstone’ high-back seats - obligatory by that stage on North American market models and an orderable option in Europe.

It is the steering wheels, though, on the models that pin-point them to representing production from the 1970 and 1971 Volkswagen model years. And that is where the slight irritation with Minichamps kicks in.

Seeing red
There are many attributes to models produced by Minichamps over the years, but one lingering frustration I have is the classic “ha'porth of tar” theme that seems to surface time and time again when it comes to authenticity of paint colours. Okay, it may sound a nitpicking stance, but one that I think is important to you when you are a marque specific collector or enthusiast. After all, in the era of so much information available via the internet, it is not particularly difficult for manufacturers to achieve more than a 80% level of authenticity in this rather visible attribute.

Setting aside these purist comments, I still find these, nearly 20-year-old, releases some of the most attractive 1/18 scale models of air-cooled Volkswagens yet made. I have always had a particular love of many of the deeper red paint colours used by Volkswagen - and of the Variant in red. As for the Notchback, late versions were never imported into the UK by VW(GB), yet for me it had one of the most harmoniously- balanced bodywork styles of the 1970s and, unlike many vehicles, looked better in its final form than in earlier versions.

Moving on to the ‘Blaulicht’ models, whilst something about the “Feuerwehr Solingen” model leaves me cold, the “Polizei Monschau” is a fabulous representation of the all-white Autobahn policing livery from an age when the more usual livery of German Polizei cars was dark green with white wings (or the dark blue/white of West Berlin).