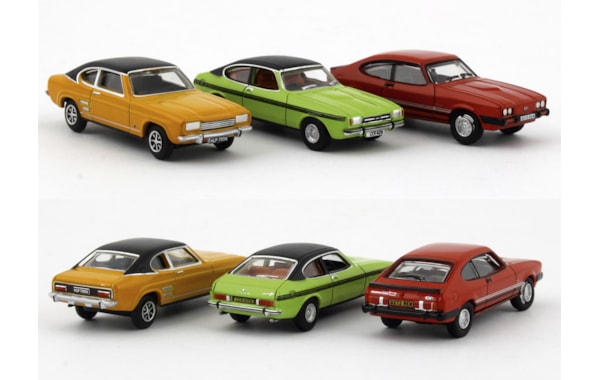 In this wonderful new set, Oxford has put together three fine examples of its nicely-tooled castings that cover all three generations of Ford's highly successful fastback.

Registered HLP 755K, from 1971-72, the Mk1 model is decorated in Maize Yellow with a black vinyl roof.  The interior is also black.  Additional external trim is mostly silver and its sporty image is reflected in the black lines along the waistline of the car and the rear wheel arches that are home to a set of fabulously replicated Rostyles.

The Mk2 emerged in 1974 with production lasting until 1978. Ford made some design changes from the Mk1, including a shorter bonnet but longer body, larger interior with an updated dashboard and a smaller steering wheel and – a first for Ford - a rear hatchback, that opens to reveal a large boot.

The model carries the registration CCR 412W and is rather eye-catching in its lime green colour scheme with black vinyl roof and lots of black trim, including the black and silver sporty stripes along the sides.  The interior is equally bright with orange seating and black dash/steering wheel.

The third Capri in the set is the Mk3 that lasted in production until 1986. Oxford’s replica is registered D272 REM from the last year of production. Comparing it with the Mk2, there were more physical differences including a dropped bonnet, quad headlights and slatted radiator grille, a rear spoiler and new ‘sawtooth’ style rear lights.

With an all-over bright red body and silver and black stripes along the skirt, further exterior black trim extends to the rear spoiler, bumpers door handles and wipers. The slatted radiator grille is finished in dark grey. The interior is moulded in the same dark grey with black steering wheel.

This detailed and colourful set gives you a superb opportunity to line up the three generations of the Ford Capri marque that is reported to have its roots in the legendary Ford Mustang.

All three models have been previously released (76CP001, 76CPR001 and 76CAP004 respectively) but together they certainly make for a fabulous set, ideal for the Ford enthusiast in your life - whether that's a significant other, dear friend, or even you. Go on, treat yourself!