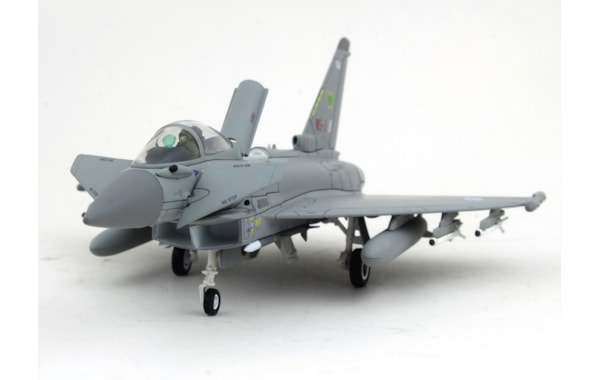 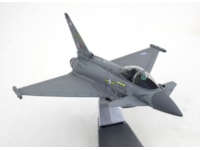 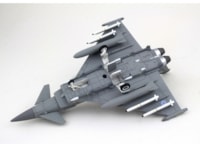 As one of the two final RAF Tornado squadrons, No IX(B) Squadron is one of the oldest units in the Royal Air Force, and one that had been associated with the now-retired Tornado since the aircraft first entered service back in 1982. Its distinctive 'Green Bat' emblem had adorned the tail of one of the specially presented Tornados during the final months of the aircraft's service and on the day No IX Squadron surrendered its Tornado GR4s at Marham, it immediately re-formed at RAF Lossiemouth, this time equipped with the Eurofighter Typhoon.

During the transitional period, the RAF mounted a photo sortie where the IX(B) Squadron retirement Tornado GR4 ZG775 flew over RAF Lossiemouth in formation with Eurofighter Typhoon FGR.4 ZJ924, as modelled here, with both aircraft proudly displaying the unit's famous Green Bat motif and confirming this interesting aviation development. Relinquishing its strike and reconnaissance roles, No IX(B) Squadron now serves as an air defence unit, providing Northern QRA cover for the UK, with an additional responsibility for providing air-to-air aggressor support for other fast jet units throughout Europe, simulating the tactics of potential adversaries. Situated on the beautiful Moray coastline in north-eastern Scotland, RAF Lossiemouth is now the most northerly of the remaining Royal Air Force bases and is certainly one of the most active.

Of course, Corgi has recently released the matching Tornado, ZG775, so a suitable pairing will land amongst the pages of Diecast Collector soon.

Its Aviation Archive range is truly one of Corgi's greatest ranges. The thought and effort that go into the design of its tooling is top notch, as ably demonstrated here by yet another superb example of the Typhoon tooling. Corgi is always very good at picking up on back stories, and matching this with its recently released Tornado from the same squadron is a great idea.

The model comes with optional weaponry and the choice of displaying the undercarriage up or down (a stand is supplied if you opt for the former, of course), and the movable canard control surfaces either side of the front of the cockpit are perfectly captured.

A sublime finish all over, with crisp and correct markings, set this wonderful model off beautifully.