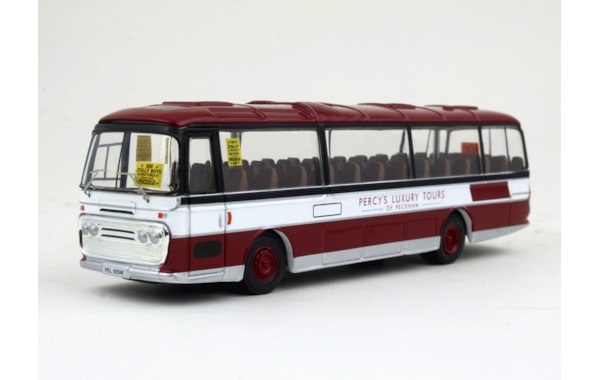 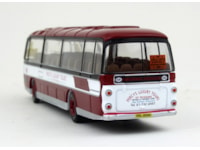 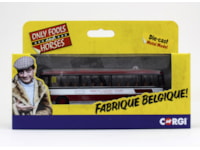 One of three new releases themed around the much-loved BBC comedy series, the ill-fated Plaxton Panorama is the first to arrive. Following on a short way behind is probably the most famous three-wheeler in UK TV history, the Trotters Independent Trading Reliant Regal van, complete with furry dice but lacking road tax (No CC85803), and a value twin-pack comprising the same van with Del Boy's Capri (pronounced by the man himself as Cappri, of course), complete with tastefully-coloured accessories (CC99189).

The tradition of the annual Jolly Boys Outing fell under Del Boy's organisation for nearly two decades, before the now legendary events of the 1989 excursion to Margate. A particularly incident packed affair, the members of the trip boarded this coach run by Percy's Luxury Tours of Peckham, with onboard entertainment provided by one of Del's slightly dodgy (as in 'flammable') radio systems. Preparing to begin the return journey home, the radio combusted, burst into flames, and then caused the coach to explode, stranding everyone in Margate. Bearing in mind that is the same place where Corgi HQ is these days, we have been assured by the team that it's not that bad.

Corgi's Plaxton Panorama casting gets a new twist with this release, capturing the spirit of the show's shenanigans well. It's not a new casting, obviously, as this has had many outings in the Original Omnibus range, as well as a more recent re-release of the Magical Mystery Tour coach in Beatles livery (CC42419).

Finished in the authentic livery, as used in the show, Corgi's model even features the window posters, as adorned the real vehicle, before combustion, of course.

Neatly finished throughout, it makes for a fun memory and comes complete with "Fabrique Belgique" packaging, mimicking words uttered by David Jason's character, including a photo of Del Boy himself, wearing that cheeky smile of his.