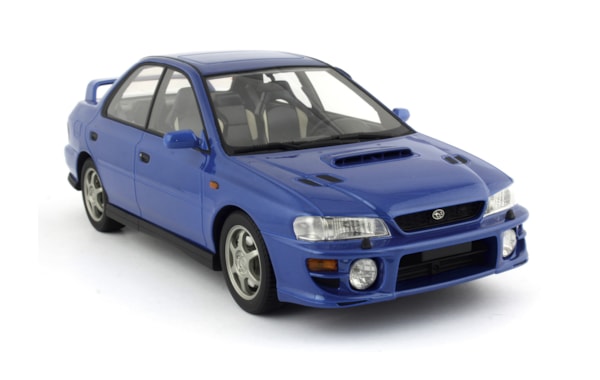 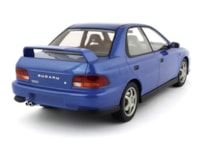 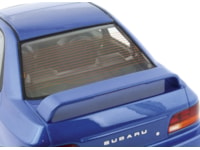 The Subaru Impreza replaced the company's popular Leone as its compact car and has been manufactured since 1992. Driven by the likes of Colin McRae in World Rally Championship, this car had been famous for winning several titles and many rallies. In its WRC livery, the blue paint job with “555” graphics has become iconic. With its 2-litre Turbo Boxer engine, meaning that the pistons are placed horizontally, the engine sound is very distinctive. Since launch, the Impreza was available both in front-wheel drive and all-wheel drive, both in four-door and five-door versions. The Impreza is currently on its fifth generation model and DNA Collectibles has replicated the first generation Subaru Impreza GT Turbo 2000 in its last form, the GC8G model.  The European release of the GC8G received special treatment regarding the front brakes, the wheels, the front bucket seats, firmer suspension and a new, more powerful, 215bhp engine. This Subaru Impreza GT Turbo 2000 is a DNA exclusive at 1/18 scale and this four-door version was derived directly from the World Rally Championship car. DNA released this model as a response to demand from its customers and just 320 have been made with each chassis individually numbered and mounted on the much-appreciated clear plastic style plinth that DNA has supplied with all of its models from day one. Starting with the famous blue paintwork, the finish is absolutely top notch, as is to be expected from DNA. The coverage is flawless and has the perfect amount of metallic sheen about it. The body shape is bang tidy all over with that purposeful look, a real trademark of the successful WRC car, captured perfectly.  The finesse to the front end around the grille and front air dam is an asbolute joy to behold, with the integrated spot lamps, indicators, side air intakes and headlamp washer units all there too. The wheels and brake discs are so beautifully replicated as well. The interior, highly visible thanks to the large 'glass' area, is marvellous and really adds to the complete authenticity of yet another stunning release from the DNA stable.