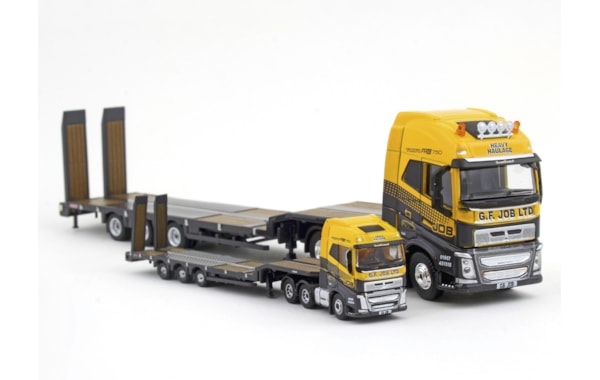 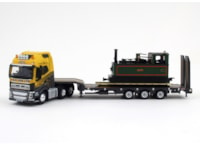 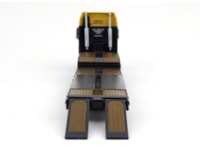 Volvo'sFH4 tractor unit with its Nooteboom semi low loader trailer is a tried and trusted combination for Oxford Diecast. Now released in the eye-catching colours of G F Job, these two were released at the same time, so we couldn't resist looking at them together.

G.F Job Limited is based in the Scottish Highlands, with its head office in Nairn.  Offering a comprehensive range of services that includes civil engineering and ground works, heavy haulage and tippers, and quarry operations, these complimented by the company's rock, sand and gravel quarry units, located in the Aviemore, Nigg and Nairn areas. Other supporting services are waste management and recycling operations, demolition works, and landscaping.

The versatile Nooteboom trailer is a common choice for many heavy haulage transport operations, and Oxford Diecast's Nooteboom tooling is very impressive at both 1/76 and N scales. The rear ramps can be positioned up, ready for the road, or down, for loading equipment and other loads - this feature is incorporated into the models at both scales.

To demonstrate the versatility of the loads that can be carried (away from G F Job's usual plant and machinery movements), we've photographed the 1/76 scale release carrying a scale-matching OO9 gauge locomotive by Fourdees. This is obviously not included, but clearly shows that both of these vehicles could be employed on respectively-scaled model railway layouts as well.

The finish at both scales is excellent, as it usually is with Oxford Diecast's products, of course. Whilst the detail is obviously more impressive at the larger scale, the quality of the printing to both is such that the N scale version looks every bit as good alongside it's bigger sibling, as shown in the main photograph here.

The finish to the cab bodies is excellent, with no flaws visible in the paint at either scale, giving the printing that all important base to be applied on.

The cab interiors have not been left out and both exhibit a good level of finish and attention to detail.

Overall, both of these will surely prove to be very popular to both collectors and modellers alike.