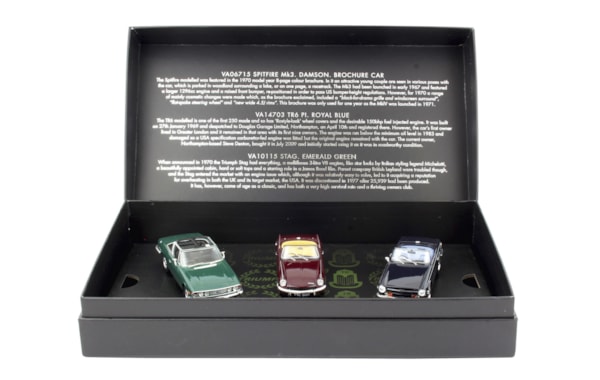 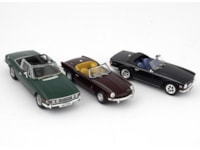 After World War II, Triumph was in decline when, in 1945, Standard, its Coventry-based neighbour, purchased the company to utilise its pre-war reputation for fine sporting and luxury cars. Standard-Triumph, as it later became, launched the TR2 in 1953 and reaped immediate rewards.

Subsequent TR models evolved until the last 'separate-chassis' TR6, was produced in 1976. The smaller 1962 Herald-based Spitfire emulated that success until production ceased in 1980, whilst the sublime 1970 Stag was a car with the panache and performance needed to succeed in the luxury GT market. These models reflect the three families of sporting car that emerged from Triumph's Canley factory, during an era when the company were triumphant on road and track.

When announced in 1970, the Triumph Stag had everything - a mellifluous 3-litre V8 engine, film star looks by Italian styling legend Michelotti, a beautifully appointed cabin, hard or soft tops and a starring role in a James Bond film. Parent company British Leyland were troubled though, and the Stag entered the market with an engine issue which, although it was relatively easy to solve, led to it acquiring a reputation for overheating. The Stag modelled has a manual overdrive gearbox and was built at Canley on 1st June 1974. Current owners, Kent-based Cliff and Catherine Nay, bought it in July 2019 from dealers Stone Cold Classics, and enjoy using this very attractive and cherished Stag regularly.

The Spitfire was based on the Triumph Herald and eschewed the trend of monocoque construction at the time in favour of a separate chassis. With the TR3 proving both popular and profitable, producing a smaller sports car from the Herald's components to compete with the Austin Healey Sprite was a logical step. The resulting Spitfire debuted to great acclaim in 1962 and ceased production in 1980, by which time 314,342 had been produced. The Spitfire modelled was featured in the 1970 model year 8-page colour brochure. This brochure was only used for one year as the MkIV was launched in 1971.

The TR6 was built between 1969 and 1976 and had become the best-seller of the TR range by the time production ended, a record subsequently surpassed by the TR7. Interestingly, of the 91,850 TR6s produced, 83,480 were exported - only 8,370 were sold in the UK. The TR6 modelled is one of the first 250 made and so has 'Rostyle-look' wheel covers and the desirable 150bhp fuel injected engine. It was built on 27th January 1969 and the current owner, Northampton-based Steve Denton, bought it in July 2009 - using it on the road straight away as it was in roadworthy condition. Steve, a trained mechanic, bought the car because the body and paint were good and he knew he could address the car's mechanical maladies - the result is a smart, reliable example.

Corgi's triple model set is a real delight, with the newly-tooled TR6 joining the established Stag and Spitfire castings. All exquisitely replicated, the attention to detail is excellent and both the Spitfire and the TR6 comes with 'extras' - the Spitfire with a 'hood up' option, whilst the TR6 has the same, but also includes a part to replicate the hood in folded down position.

All three are beautifully presented in a stylish, bespoke flip-up-lid box, with the extra parts stowed beneath the inner plinth. A truly wonderful release for the Triumph enthusiast.