Automodello's latest Ford model is a real transport(er) of delight! 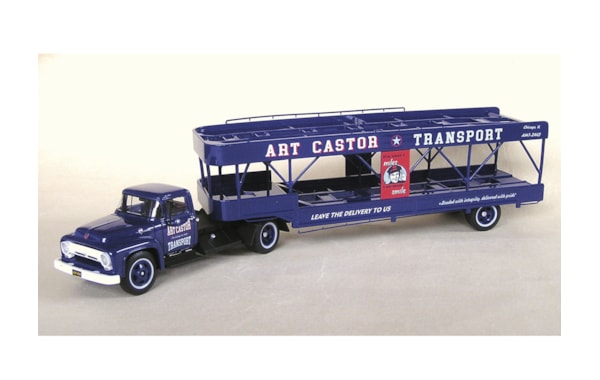 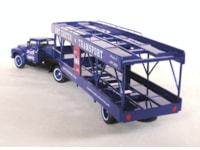 Art Castor is something of a legend in Chicago old-car circles. Born in 1956 - the same year as his truck - he almost literally grew up in his father’s garage on the famous Route 66 highway on the outskirts of the city and, by the time he was 10 years old, he was taking on some pretty big jobs there, from adjusting valves to replacing clutches. During his years in high school, his skills were famous with the local hot-rod fraternity, and having him work on a car gave it a big advantage in the neighbourhood races and at the dragstrip. His first love, however, was for older classic cars over modern machinery.

Recognising his mechanical genius, his father passed the business to him when he was just 21, and his first big job was to restore its 1956 Ford F-600 Transporter back to pristine condition. In regular use, it became his calling-card and a spectacular advertisement as he shipped cars around the Midwest. The emphasis of the business had shifted from servicing and repairing modern vehicles, to the restoration and maintenance of classics, so the faithful truck was a major asset in both practical and promotional terms.

The Ford F-600 itself was one of the Ford F-series of popular trucks that started in 1948 and has gone through numerous generational changes over the years - the F-150 is still one of the best-selling trucks in the USA today. Back in 1956, the range was in its second generation, with modern styling, comfortable cabs and good all-round visibility. The F-600 was usually powered by a 256 cu in V8 that gave 158 bhp, and its versatility allowed it to be used as a basis for everything from fire trucks to heavy haulage.

The new release from Automodello is a beauty, well up to its usual high standards of workmanship and finish. The resin mouldings are crisp and the finish, in dark blue, is excellent. The white grille, front bumper and wheel rims are picked out, and the rear bed of the tractor with the twin fuel tanks is matt black, although the pivoted trailer coupling is body colour.

Plated details include the door handles and filler caps, and there is a single driver’s door mirror and a pair of windscreen wipers in black. The lights front and rear have clear lenses and, as well as the “Art Castor” decaling, there are the “Ford” and “F-600” motifs on the bonnet. All the cab interior detail is there as well, including the interior mirror.

The trailer unit is a masterpiece in moulding, the intricate posts and braces between the two levels especially. All the rampwork is detailed, and photo-etched low-level rails are fitted. The finish is excellent, with wheels that naturally match those on the tractor.

All in all a remarkable model, and very good value - especially given the limited production of just 249 pieces. The trailer is incredibly delicate and needs the most careful of handling. Automodello even supply guidance as to how to unpack the model from its luxury, 2-part box! An absolute triumph.