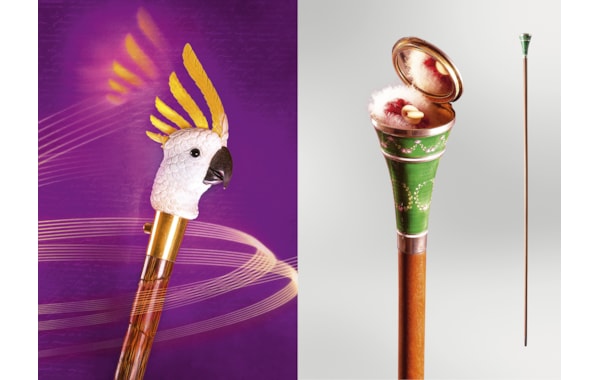 Gadget or system canes by inventive spirits are perhaps the most fascinating and most collected canes. These quirky creations feature hidden devices such as a fan, an umbrella, a bottle and drinking glass, a perfume bottle or a sword. Sometimes also scalpels and syringes in canes for doctors. Also, musical instruments, fishing rods, telescopes, sewing kits and corkscrews can be hidden in the head of a cane. More than 1500 patents were applied for during the 18th and 19th centuries. The two essential properties of the gadget cane are something hidden and a combination of several tools or functions. In addition to the official term gadget cane, there are also the more romantic expressions such as canes with inner life or canes with soul.

Findings from the tomb of Tutankhamun, as well as medieval bishopric staffs, prove that specially shaped or ornate sceptres have served as symbols of power since time immemorial. But it was Louis XIII who brought the cane to importance as a royal accessory. The king, as his portraits depict, supposedly always held one in his hands. He also gave them – along with valuable snuffboxes – as gifts of honour. Accordingly, gentlemen who wanted to be fashionable never went without this accessory from that time on. At the time, these were sort of ornate rods without a curved handle that were held in the hand or carried under the arm.
The 19th century and the beginning of the 20th century became the age of the cane. The tremendous popularity then created the desire to be seen with a cane. And so a wealth of unique pieces with practical and strange handles and a mysterious inner life were created. The painter Henri de Toulouse-Lautrec, for example, owned a cane containing a bottle that held a pint of absinthe.

This special exhibition, held Spielzeug Welten Museum in Basel, features over 250 particularly fascinating system or gadget canes harbouring obvious or concealed additional functions. There may be a shaving brush and soap hidden in the handle for men; for women, a little bottle of smelling salts; for the globetrotter, a compass and thermometer. Clarinet canes – rarities created by Swiss instrument maker Ulrich Ammann in around 1800 – are also on display for you to admire. This unique exhibition has come about through loans from private collections in the region. For this reason, it will be shown exclusively in Basel. The exhibition concept is just as unique. State-of-the-art technology will be used to display the system canes in both their open and closed states. A definite must-see!

More details can be found at www.swmb.museum

Did you know that the latest issue of Diecast Collector is on sale?