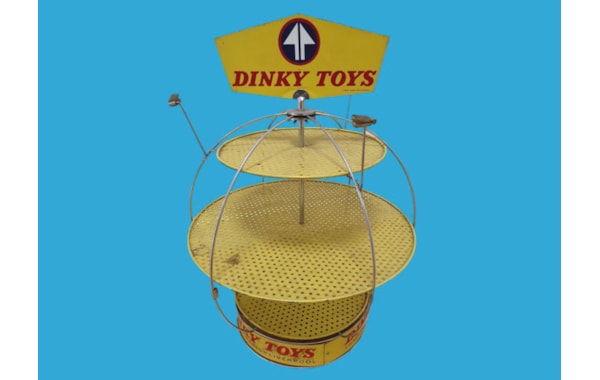 Presented as one of the star lots in Excalibur Auctions’ 24 January sale is this ultra-rare Dinky Toys display stand.

The auction house was looking into the signs origins over the Christmas period, only to find that there really wasn't very much information out there about it.

Many of the Dinky display stands are well documented. There was a smaller version used as a counter-top display in some toy shops, and cardboard stepped displays appear regularly at auctions. Some of the British Pathé films about the Dinky factory even feature the signs.

This one doesn't appear anywhere however, so it is believed to be quite the rare find, probably created by the factory for an exhibition as there are no codes marked on it.

Sarah Torode from Excalibur Auctions Ltd said: “The chrome work immediately suggested that it could be early 1960s. Although some of the people we've asked about this recall seeing a counter top version in toy shops at the time, this stand is big! There were several toy fairs in 1963; the 10th Toy Fair held in Brighton, with the International Toy Fair going to Harrogate later in the year - as covered by British Pathé”.

As well as this interesting item, the second part of the Barry Fentiman Private collection of Model Railways will also go under the hammer. Featuring Wrenn and Hornby Dublo models the sale will include a rare OO gauge Wrenn W2301A Streamlined Coronation class steam locomotive in LMS blue "Coronation", in addition to more than 450 other items from this collection and many others.

The Saturday auction on 25 January will be a sale of movie and music memorabilia, comics and comic art, and has other hard to find and unusual items for all types of collector.