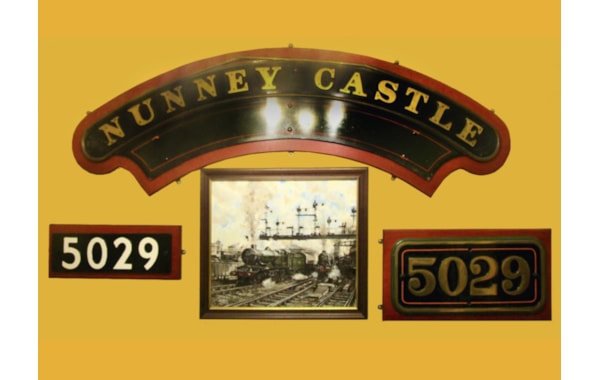 There are 5 totem signs (railway station signs), including Pant, Oswestry, Ellesmere, Llanymynech and Gobowen, which could end up being displayed, like paintings, on the walls of collectors driven by a passion for the age of steam and all that is associated with this bygone era. Estimated at low-mid-hundreds each they are expected to surpass these estimates.

For the out and out steam locomotive fan there are a number of attractions including shed plates and a lantern, but the star of the show is the cast iron Nunney Castle nameplate. This will be sold with the cabside number plate and smokebox plate for the same locomotive (5029). All were displayed in pride of place in the sitting room of the vendor’s home, no mean feat considering the weighty nameplate is 174cm long… any future owner will certainly have to have strong walls! Interestingly, the other nameplate for this Oswestry locomotive sold for £17,860 (including premium) in November 2003. Given the market has changed since and this example has some damage on the top edge the estimate is £4,000-6,000. There is only one precedent for this locomotive nameplate at auction and so it is impossible to know what it will fetch at auction, especially in the current market. Nunney Castle was built in May 1934 and withdrawn from service in December 1963. The locomotive was then sold to the Great Western Society.

The other part of the collection is the model steam engines. There are many to choose from, but they are all O-gauge and well made, with metal bodies, chassis and buffers. The Great Western Railway locomotive ‘Dartmouth Castle’, illustrated, exemplifies this perfectly with its line painted green livery (estimate £200-400).

So, whether a train enthusiast, or a model railway purist there is plenty to satisfy both parties.