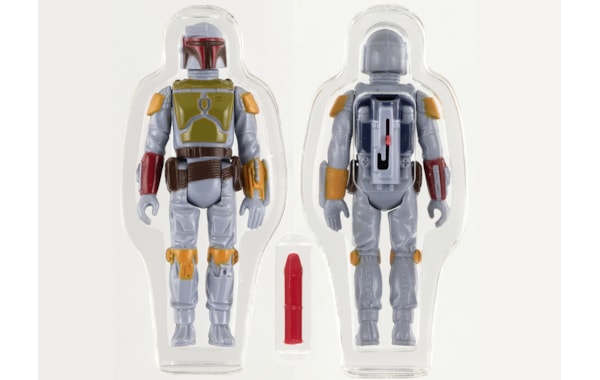 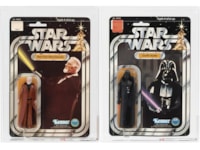 Hake’s, America’s first auction house specialising exclusively in pop culture memorabilia, has rewritten the history books yet again with their $185,850 sale of an elusive Star Wars action figure. Finishing at the top of Hake’s November 6-7 auction that grossed $2 million, the Boba Fett J-slot rocket-firing prototype came with a storied history that began at the 1979 New York Toy Fair. Although the figure made its debut there, it never actually saw production, making it exceedingly rare. According to Hake’s president Alex Winter, its astronomical selling price is a world auction record for any Star Wars toy.

Winter said that in the run-up to the auction, the toy captured the attention of major newspapers, national TV news outlets and “many serious collectors worldwide.” It received a total of 15 bids before achieving its final selling price. The buyer’s identity has not been revealed.

Graded AFA 85+ NM+, the 3¾-inch figure is a fully painted Kenner Toys engineering pilot with country of origin and copyright stamps, indicating it had reached the final phase of prototype development. Originally, 80 to 100 Boba Fett prototypes were shipped to Kenner from Hong Kong for safety testing, and of those, approximately 24 to 26 examples of the J-slot variety – referring to the J-shape slot on the figure’s reverse side – are thought to have survived.

Hake’s broke its own house record with the sale of the Boba Fett prototype. The previous world auction record for a Star Wars toy was $112,926, which was paid for the AFA 85 NM+ Boba Fett L-slot rocket-firing prototype that led Hake’s July 11, 2019 sale. That selling price overturned the previous world record auction price for a Star Wars figure – $86,383 – which was set by an unpainted L-slot prototype graded AFA 85 that Hake’s sold in March 2018.

Two Star Wars double-telescoping action figures, so named for the second extendable piece in the lightsaber’s design, also put in a powerful performance at the November 6-7 auction. A Ben Kenobi 12-back-A AFA 70 figure with a white footer in the packaging (denoting an early production) commanded $64,900, while a Darth Vader 12-back-A AFA 75+ followed closely behind at $62,823. Another rarity, a 1979 Sonic Controlled Land Speeder, AFA 85NM+ in its encapsulated box, earned $18,950 against a pre-sale estimate of $5,000-$10,000.

Learn more about Star Wars in our in-depth feature here.

A little out of your price range? How about something more attainable? Read the full story here.