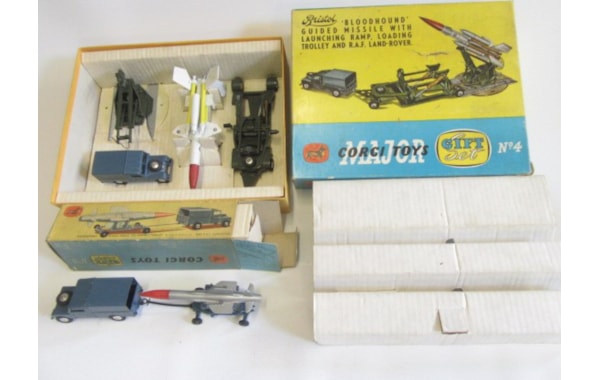 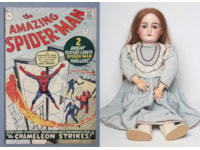 An impressive spread in the latest October toy sale

For the guys? An Action Man Armoured Car, boxed, along with two Action Man electronic figures, also boxed realised £40 at the recent sale, while an Action Man Astronaut with space capsule raised £60. Kenner’s Ghost Busters range also proved popular: a Fire Station Headquarters in its original unopened box with packing made £380 and a Kenner Ghost Busters ECTO-1 vehicle, again boxed with original packing, was fought to £230. A number of carded bubbles containing Ghostbusters figures and ghosts ranged from £35 to £160, showing perhaps, the next collectable area?

A Kammer & Reinhardt bisque socket head flirty doll, with blue glass flirty eyes (!) and a jointed composition and wood body, also sold, as did a lovely Tete Jumeau size 12 bisque socket head doll. She had blue paperweight glass eyes, an open mouth with six moulded top teeth, pierced ears, a brown wig and a jointed composition and wood body. Her red jacket with velvet trim, red velvet bonnet and red leather shoes singled her out, and someone was happy to pay £720. A couple of dozen teddy bears also featured in the sale.

On the cheaper front, a child's building brick set contained stone parts in three colours, all in a wooden box, marked G. Watther. Very similar to Richter’s Anchor Bricks, this lot made £24.
Lots of kits were sold:  15 mint bagged series 3 Airfix kits (comprising aviation and military vehicles) made £100 while Airfix factory samples for the new blister packs, comprising a brown card box containing a dozen undecorated Messerschmitt BF109 kits made £28; a similar affair with Boomerang aircraft also made £28: real historic bargains, in my book.
Elsewhere an unusual Meccano Circuit 24 Go-Kart set with two controllers and transformer made £50. Working steam engines, railways and diecasts also received plenty of attention but the star performer had to be a US Marvel comic: originally 9d (4.5p), a Spiderman issue was knocked down for a cool £13,500…