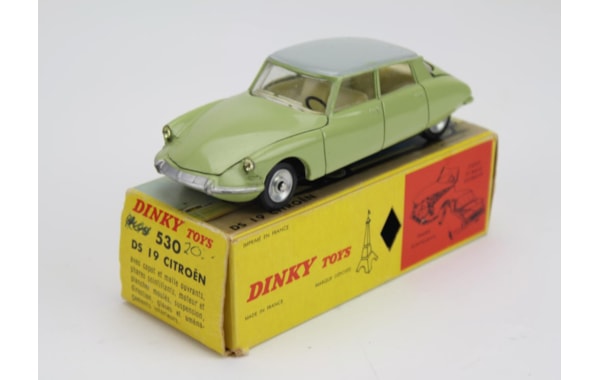 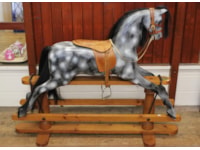 Lymington Auctions’ event featured a number of lots containing an assortment of diecasts.

Typical of these was a tray of six unboxed Dinky playworn and repainted models that included four buses, a Packard and a scarce early pre-war original blue and yellow tractor (which was sadly missing an orange wheel). This ensemble raised £30. A Dinky No. 258 De Soto Fireflite Police Car in black, in good to excellent condition, made £45 whilst a French Dinky Citroen DS19 in light green with a grey roof was rather more interesting, this making £75. Several lots were devoted to Brooklin Models: a "Collars of Wembley" 1933 Holland Coachcraft Van showed streamlining in all its glory and being mint and boxed, it sold for £100. The winning bid for the Brooklin Silver Anniversary Set, featuring a 1936 Pierce Arrow 1601 Sedan and a 1937 Pierce Arrow Travelodge, was £65; whilst a pretty duo in the shape of a Packard Light 8 convertible and a Dodge Bimbo Van raised an impressive £160. On to carded blistered figures, where four Action Figures included a pair of Street Fighters (Ryu and Guile,) along with two UFC Ultimate Fighting Figures (Lyoto Machida and Diego Sanchez). All were contained in blister packs and this quartet was taken home for just £35. On a much bigger scale was the Thomas Jackson of Devon dappled grey sponged rocking horse mounted on a metal and wood base. Absolutely stunning, and a great talking point for any collector (and small child, of course!), its base measured 136cm: a lovely mount, bidding spurred this thoroughbred to the finishing post where it reached £320.