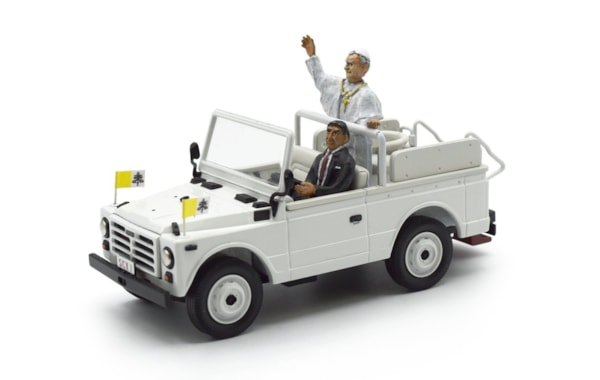 Brooklinn Models has proudly announced an exclusive limited edition of the Fiat Campagnola Pope John Paul II, to mark the 40th Anniversary of the attempted assassination of the Pope, on 13th May 1981.

Priced at £149.00 and offered initially to its loyal customers to pre-order before going on general sale to the public, any of the limited run of 99  models remaining after this period will then be put on the website for sale (www.brooklinmodels.com).

The Fiat Campagnola was donated by Fiat to Pope John Paul II during his visit to Turin on the 13th of April, 1980. On May 12th 1980 the Campagnola was registered with plates SCV 1 and then mainly used for the official ceremonies in St Peter’s square. In fact John Paul II was on board this Campagnola when he was attacked. The car, in accordance with the Pope’s wishes, remained in service even after this dramatic episode, despite the misgivings of the security staff