A lifetime of collectables go under the hammer at Bertoia Auctions 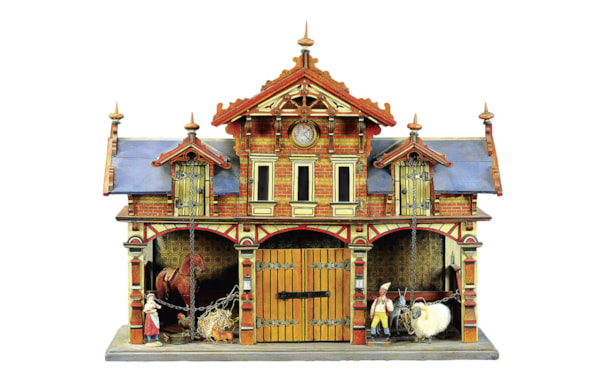 Construction toys, fire engines and tinplate trains are all set to go to auction in October

On 11 October Bertoia Auctions will put on the block a lifetime collection of one Tony Annese, a real estate developer, who started collecting toys in the 1970s. The vast array will include Christmas antiques, an area that resonates strongly with US collectors. As such, the sale will feature some large clockwork Santa nodders with glass eyes and rosy-cheeked faces, along with Christmas store displays, early lighting and ornaments.

Do you like Marklin trains? A desirable American Eagle set is up for grabs, possibly pre-dating its actual production date, if you follow. It has a dramatic look, with a big cowcatcher and smokestack. Other highlights include a Marklin Congressional Limited set and CLR O gauge steeple cab engine.

Early Marklin accessories also get a look in: stations and other buildings are very detailed and thus highly collectable (see the C&T auction review elsewhere in this issue), and these really set off any layout. Railway and civilian figures won’t be omitted, either. Bertoia will offer some Heyde examples, both as boxed sets and individual figures. Another good example is the very rare 1914 set of large scale figures made by Pfeiffer that depicts an exquisitely dressed family of four, with father in a top hat and frock coat, mother in a floor-length dress and feathered hat, and two children in period attire.

Amongst many US collectors, cast-iron transportation toys are very much in vogue. American fire toys from the 1880s and 1890s go under the hammer and the collection also includes construction toys of the 1920s and 1930s, as well as lighter cast-iron vehicles. A top piece from this category is a 1920s Kenton Overland Circus animal cage truck in near mint condition with original yellow paint. The sale will also include a number of lithographed paper-on-wood toys and games.