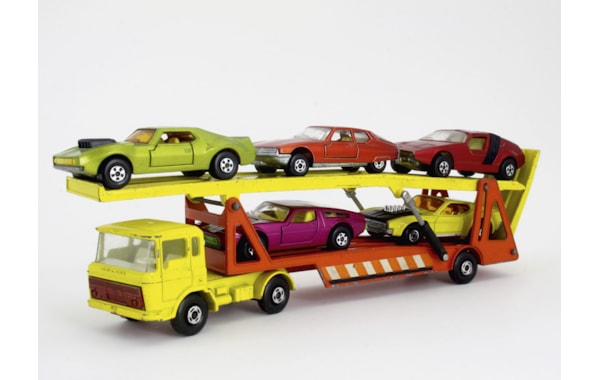 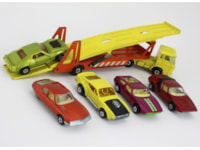 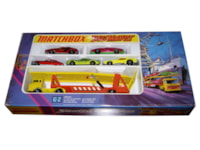 The Matchbox gift sets were real favourites of mine from my early Matchbox years and I’ve recently put together this collection that represents the offerings of the rebranded G-2 “Big Mover” set back in 1974.

The G-2 Transporter Set had been around for a good few years and even went as far back as the regular wheels Major Pack pre-Superfast days. The models carried, and even the transporter itself, changed many times during the years that the set was on sale as the 1-75 range evolved, as well as the change from Major Pack to Super Kings for the larger releases.

The set was relaunched as the G-2 “Big Mover” Transporter Set for 1973, although the models carried in the catalogue image for that year included three dragsters and two concept cars – hardly your average load to be seen on the motorway. So for the 1974 catalogue, Matchbox had ditched the fanciful cargo and replaced it with an only slightly more realistic collection of two exotics, two American muscle cars and one concept car.

At the heart of the set is the Super Kings K-11 DAF Car Transporter – a regular wheels Major that had acquired Superfast-style wheels in the 1972 catalogue. Strangely, the 1972 model also saw the model reverting to the earlier DAF side graphic but from 1973 it changed back to the 1971 orange and white hazard graphic that you see here. For the 1974 payload, Matchbox chose five very popular cars from its current Superfast 1-75 range: No 9 AMX Javelin, No 32 Maserati Bora, No 41 Siva Spyder, No 44 Boss Mustang and No 51 Citroën SM. All components from this set were completely standard and there were no special versions of any of the models, making this an easy set to replicate, as I have done here. All I need to do now is find an original box!