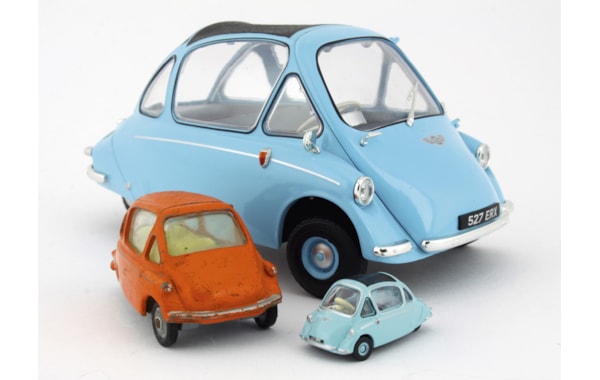 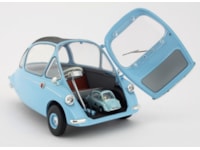 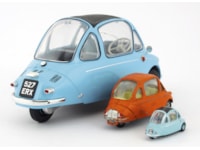 My fascination with these fabulous little beauties began thanks to Corgi Toys. Released in 1962, its No 233 Heinkel Economy Car was in production for an impressive 10 years, selling over 1.6 million during this time. I was on holiday when I originally bought mine and, strangely, I can still picture the shop where I made my acquisition, but I’ve no idea where it was! Somewhere down in Devon or Cornwall I would imagine. Released in a variety of colours, mine came in orange – so when the time came to replace my long since given away example, it had to be that colour. These command a fairly chunky sum in mint condition these days but, as mine was ‘well loved’ back in the day, I happily parted with a crisp £5 note a few years ago to pick up the slightly playworn example you see here.

These amazing little cars always make me smile so imagine my delight when Oxford Diecast announced that it was releasing one in 1/18 scale in 2017. When I found out it would have an opening front door too, I almost couldn’t contain myself! I placed a pre-order for the very first release, 18HE001 – a Heinkel Trojan in Roman Blue. It’s a model of a surviving British-registered right-hand-drive version, made under licence by Trojan Cars.

Production of Heinkel’s marvel needs a little explanation for clarity, so here’s a quick history lesson: The Heinkel, originally called the Kabine, was designed by Heinkel Flugzeugwerke and built  from 1956 to 1958. Production for UK versions was transferred under licence to the Dundalk Engineering Company in Ireland in 1958 but the licence was withdrawn soon afterwards due to poor quality control. Production restarted in 1960, again under licence, as the Trojan 200, built by Trojan Cars Ltd. in the UK – this continued until 1966. The Kabine/Trojan has a steel unit body and access to the interior is by way of the hinged opening front door. The fabric sun roof serves additionally as an emergency escape hatch should the only door become jammed in a frontal collision.

Back to my little collection and when Oxford released the same car (same registration, colour etc.) for its first release of the Heinkel in 1/76 scale during 2018 (76HE001), I had to get one of these too. Thanks to the opening front door on the 1/18 model, the little 1/76 actually sits nicely inside and, doing a quick bit of mathematics, if the 1/18 was real size, the 1/76 version would be roughly ¼ scale – if you see what I mean?

Oh and if you’d like to get up close to a real one, pay a visit to the Bubblecar Museum near Boston in Lincolnshire (www.bubblecarmuseum.co.uk) – it’s definitely worth the trip!