Do you remember LEGO Fabuland? 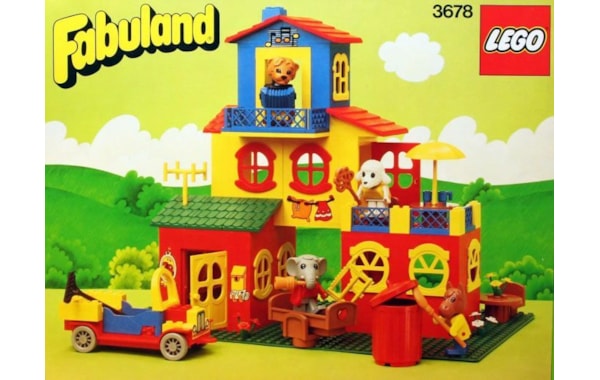 Heading back in time with the colourful and unusual LEGO sets from the '70s and '80s. ...

Over the past few months we've regularly covered vintage and new LEGO sets here on Collectors Club of Great Britain and auctioneers have often tipped LEGO as one of the potential collectables of the future. In fact, the Minifigures alone regularly go for large sums.

However, one of the more unusual aspects of LEGO was the Fabuland series, which was made by the Danish company between 1979 and 1989. Featuring slightly larger colourful blocks and Minifigures with cartoon animal heads, the Fabuland series is really like nothing else LEGO has ever produced.

It was aimed at those children who had grown out of LEGO's large pre-school Duplo blocks but would potentially swallow the smaller normal bricks or stick them up their nose… you know children, they basically can't be trusted with anything fun. As a result the Fabuland franchise was born. Unlike other LEGO sets at the time, all the Minifigures were individual characters with names, such as Edward Elephant, Bonnie Bunny, Max Mouse and Clive Crocodile. What's more, each character had a particular role to play within the world of Fabuland, so you had pieces like Dr. Dog who was, rather obviously, a doctor and appeared in set no. 347 Doc David's Hospital, while Lionel the Lion was the Town Mayor and teacher.

Fabuland was also the first LEGO theme to feature stories about the Minifigures and the larger sets included a short story about the animals. In fact, so charming were these little animals that in 1986 Film Fair Productions produced a series of animated adventures set in Fabuland called Edward and Friends. You can actually watch the first episode on YouTube, if you fancy a trip down memory lane.

In terms of the sets they were hugely varied from simple vehicles to complicated houses, allowing you to create a very diverse town. Some of the smaller sets actually only came with two pieces, like no. 324 Ricky Racoon on his Scooter, whereas the larger models, such as no. 149 Fire Station, had almost 150.

Among LEGO collectors, there's still a lot of love for this long-running theme and Fabuland fans are keen to get their hands on all the pieces… particularly the Minifigures. Of course, they're not really the type of items that currently crop up at auction but it's certainly something to keep an eye on for the future - particularly when you start looking at recent eBay prices.

Once again showing the appeal of Minifigures, one of the top lots was a job lot of Fabuland animals. One eBay auction saw 37 Fabuland figures sell for £124.99, which is just under £4 per figure. At the moment, Fabuland could be a bit of a hidden gem at toy fairs or even car boots because sellers might not know exactly what they've got and may not realise that, in some circumstances, it's just as popular as more traditional LEGO sets. So, get out there and start looking for fabulous Fabuland!