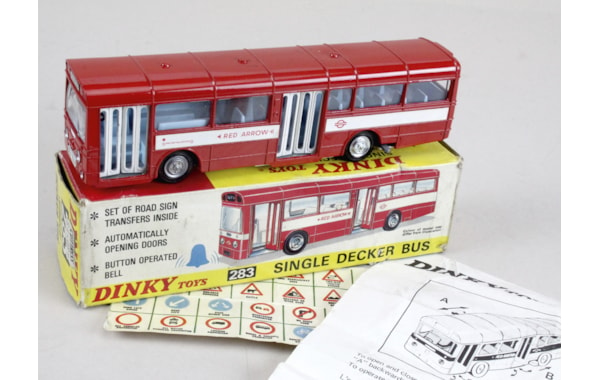 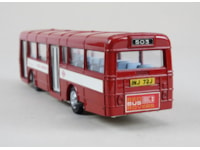 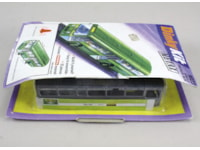 The first batch of six AEC Merlins was introduced in April 1966 for the new express Red Arrow service on route 500 between Victoria and Marble Arch, and occasionally Oxford Street. In September 1968, seven new Red Arrow routes were introduced, all operated by Merlins on routes 501 to 507. Another Red Arrow route, 513, was introduced in January 1970 so by now the fleet of Merlins had become an incredibly common sight on the streets of central London.

At the same time, Dinky Toys produced one of my favourite models as a growing lad and, to be honest, it is still one of my favourites today. My original version of its Red Arrow ‘single-decker bus’ No 283 was suitably playworn by the time I had finished with it and it got packed off to the local hospital with nearly all my other diecasts, but it was one of the first I sought out when I rediscovered my formative passion. Although it doesn’t stand up to close scrutiny when compared to the excellent modern releases by Britbus, it was (and still is) a fabulous piece of work, with excellent playability functions such as the opening doors operated by a slider on the offside of the bus and the working bell that ‘dinged’ when the switch just aft of the nearside rear wheel was flicked. It came with the Red Arrow stripes applied but the registration plates (non-realistic numbers), destination blinds and rear advertisement came on a separate sheet. The early releases also came with a sheet of Highway Code symbols – a miniature reproduction of the vinyl stickers available at the time that could be found on the inside of many vehicle windscreens of the era. Many of these sheets that came with the models got cut up and used for home-made road signs so these are quite hard to find.

Dinky No 283 originally came in an all cardboard box with end flaps and when the Highway Code stickers were dropped the boxes were modified with a sticker to cover the “set of road sign transfers inside” text with “2 exciting features” to highlight the remaining two original selling points. No 283 was later released in ‘blister’ packaging on a cardboard plinth. It was also issued in a rather bizarre shade of darker metallic red, rather than London Transport red. By way of maximising the use of its tooling, Dinky Toys produced this casting as part of its Dinky Kits series as No 1023 in London Transport ‘Country Green’. I found one of these for sale unopened a few years ago, complete with the paint phial (although I doubt that would be much use now after about 45 years!) – I can’t bring myself to open it and make it though.