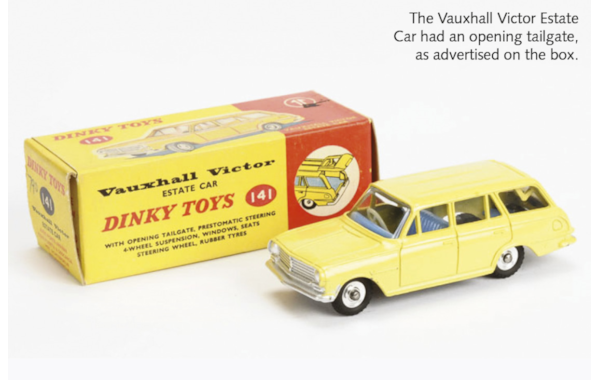 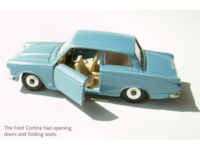 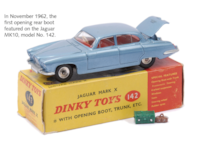 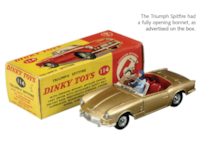 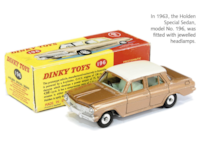 As a market leader of diecast toys in the early 1950s, Dinky Toys were competing with many more manufacturers by the end of the decade, and particularly into the 1960s. It was important to develop and introduce new toys with desirable features whenever possible. Needless to say, Dinky Toys were often at the forefront of exciting new developments.

In November 1962, the first opening rear boot featured on the Jaguar MK10. The car was released as model No. 142, and appeared in metallic blue with a red interior, spun wheels and treaded tyres. This car also had steering but due to the new diecast base, it had ‘Prestomatic’ steering. The base was very different to the tinplate bases, and brought additional weight and sturdiness to the model. The boot was very spacious – just like the real Jaguar cars and an item of luggage was supplied to add to the enjoyment and use of this new feature.

In April 1963, the Vauxhall Victor Estate Car was released as model No. 141. This model had the all-new opening tail-gate feature. An idea that proved to be very popular and one that was used again on other vehicles. The Estate car was issued in yellow with a blue interior, windows, suspension, silver trim and ‘Prestomatic’ steering.

In June 1963, Dinky Toys released the Ford ‘Cortina’ Saloon, as model No. 139. The Cortina had a number of the new features including opening doors and front seats, which were able to tip forwards, just like the real thing. With windows, seats, steering wheel, suspension, ‘Prestomatic’ steering, simulated windscreen wipers and a ‘fully detailed dashboard’, this car was certainly well equipped. The windscreen wipers were moulded into the windscreen and gave the car a particularly realistic appearance. The segmented rear light cluster gave the model a rather different look to most other cars. This model was issued in metallic blue with a deep cream interior, and later appeared in a variety of colours, as it was re-released.

Another first, again in 1963, was the release of the Holden Special Sedan as model No. 196. This was the first Dinky Toy to have jewelled headlamps. The Holden appeared in gold with a white roof or turquoise with a white roof. There were a variety of base colours used and there was also a South African issue in white with a turquoise roof. The Holden Special Sedan was available until 1970. This was a rather impressive car with an opening bonnet and rear boot. The boot even had an item of luggage supplied for those all-important trips away.

The Triumph Spitfire was also released in 1963, as model No. 114, and had a variety of memorable features. This shapely open-top sports car, came in a number of colours until it was withdrawn in 1971. These included metallic silver-grey or a gold body with a red interior, red with a cream interior, or metallic purple with a gold interior. The gold version came both with or without a transfer on the boot lid, which read: ‘I’ve got a tiger in my tank’, the word tiger being replaced with an image of a tiger’s head. This model had a cast base, ‘Prestomatic’ steering and a realistic bonnet, which opened fully to reveal a detailed engine. It also had a silver grille and bumper, together with jewelled headlights, and a female driver wearing a seat belt. The belt could be unclipped from a stud hole moulded into the casting, behind the driver’s seat. All the various ‘Spitfires’ are very sought after and seem to be increasingly hard to find in mint condition.

With increasing competition by a number of toy manufacturers and after some financial difficulties, Lines Bros., a former competitor finally took over Meccano in 1964. Lines Bros. had established the Spot-On diecast series through its range of Tri-ang toys. In order to compete with Dinky Toys and Corgi, it had chosen a slightly larger scale and advertised the range as being ‘Spot-on’ at 1/42 scale. Whereas diecast models by Dinky and Corgi were of varying scales, the marketing strategy for Tri-ang was that the cars were all the same scale, except for two models, and therefore looked right together as a collection. This contrasted with Corgi’s individualised scaling system for each car, and Dinky’s manufacturing strategy of releasing a set of vehicles in series, each item within the series being the same scale.

The Spot-On models were certainly a new and very desirable range of toys. After due consideration it was clear that the workshops and tooling facilities at Binns Road were of a good standard, despite the factory appearing generally a little run-down. It was decided to move all production to the new venue and to bring all future Dinky toy models into line with the Spot-On range, in the slightly larger scale. This was a significant change for Dinky cars and commercial vehicles.

As well as a whole new series of models, Dinky took on a different approach to advertising, and in 1964 came the first TV adverts, together with adverts in children’s comics. This was a more direct and rather successful way of informing the many collectors, who were keen to spend their pocket money.

Skip forward a year and the Ford Cortina Rally was as model No. 212. This was a lively looking model in off-white with a black bonnet and red interior. Not only did it have a spotlight on the roof of the vehicle but it also sported ‘East African Safari’ and ‘Castrol’ labels. This gave the Cortina an impressive competitive appearance. It was in 1965 that Dinky replaced the use of transfers with stickers, and these were certainly used to good effect on the Ford Cortina Rally car, which was available until 1970.