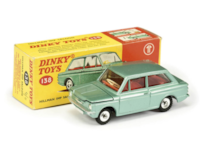 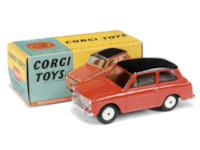 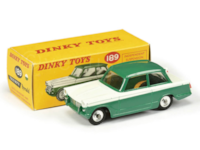 In this series featuring Corgi and Dinky models from the 1950s up to 1970s, we 'unwrap' a few of the vehicles to reveal a sprinkling of detail.

In this series featuring Corgi and Dinky toys from the 1950s up to the 1970s, we 'unwrap' a few of the models to reveal a sprinkling of detail. These two market leaders were once great rivals, and yet both gave such pleasure to collectors of all ages.

In 1958, Dinky released the Austin A30, as model No160. It was issued in turquoise or pale beige, with smooth or treaded grey plastic wheels. This small rounded car had no suspension or interior but was never the less, a very endearing little fellow. It was available until 1962.

Dinky Toys also released the Fiat 600 in 1958, as model No183. This small foreign car was issued in red or pale green with smooth or treaded grey plastic wheels. As with the A60, the wheel and tyre for the Fiat 600 was manufactured all in one piece. This model was too early to have an interior or suspension, and is now quite a hard toy to find at all, let alone in good condition.

The Triumph Herald was another popular small family saloon car, which Dinky decided to make. The Triumph Herald Saloon was released in 1959, as model No189. This car was issued with a light blue roof and sides, together with a white bonnet, boot and centre strip; or with a green roof and sides, also with a white bonnet, boot and centre strip. While this model had no interior, it did have suspension. This was courtesy of a metal strip attached to the baseplate, which protruded across the front and rear axles. Both variations had spun hubs and rubber tyres.

The Herald has always been a popular toy, which was released in three different box types, during the five years that it was available, up until 1964.

The last of our Dinky cars to be featured is the Hillman Imp, which was released as model No138, in 1963. The Imp was issued in light metallic green, with a red interior or metallic red, with a light blue interior. This model had an opening rear engine compartment, showing a detailed engine in silver, and also an opening front bonnet for storage. It had suspension, a diecast base, shaped hubs and rubber tyres. It was purchased in a red and yellow box, or the later red, yellow and white box – both with illustrations of the car and the opening features. The earlier box also indicates that the bonnet contains a suitcase.

The first of the Corgi Toys were released in 1956, and the first car to have drawings prepared for production, in April 1955, was the Austin Cambridge. This casting eventually became the second toy to be released in 1956, as model No201. It was available in a variety of colours, including a few two-tone issues. The cars that were finished in either pale blue or turquoise seem to be the most common. This model had windows but no interior or suspension, and was produced with a tinplate base. It was finally withdrawn in 1961.

Corgi released the Austin A40 in 1959, as model No216. It had windows, of course, and a tinplate base but no suspension or interior. It was issued in two different two-tone colours, either light blue with a dark blue roof, or red with a black roof. It had silver trim, and was a popular model, as were all the early standard release Corgi Toys.

Both the Austin Cambridge, and the Austin A40 were also released with mechanical flywheel motors. While these models were not as popular at the time of their original release, and consequently fewer were produced, they now harder to find and command a greater premium.

It was only a matter of a few years until Corgi Toys were producing cars with windows, interiors and suspension. The Ford Consul Classic was released in 1961, as model No234. The car was issued in beige, with a pink roof, a lemon interior, and silver trim. It had a well-designed opening bonnet, which revealed a detailed engine in silver. This particular model had a cast base, which was finished in beige to match the colour of the bodywork. The shaped hubs and rubber tyres enhanced the appearance of the car, and the excellent, rather firm suspension, made this a sturdy reliable small family saloon. The model was available until 1965.

Another small family saloon entered the Corgi stable in 1961. The Triumph Herald Coupe, model No231, was released in gold and white or blue and white, both with a red interior. Once again, the diecast base was finished in the same colour as the main bodywork. It had great suspension, flat or shaped hubs, rubber tyres and silver trim. Best of all, this model had a bonnet, which opened fully just like the real car. It even had a small air filter fitted to the engine, which was particularly well detailed, and needed to be, as so much of it was on view when the bonnet was opened. The Triumph Herald was manufactured in 1/44 scale, and remains a very popular and much sought after model.

Yet again, the number of small saloon cars available to us, as young aspiring drivers was excellent. The connection and popularity between the toys and the real cars was unmistakable, and the world was a much simpler place. Whether you collected Corgi or Dinky toys, they all became part of the same playtime - though they did perhaps begin to shape the ideas and thoughts we might have for our own real cars later on.