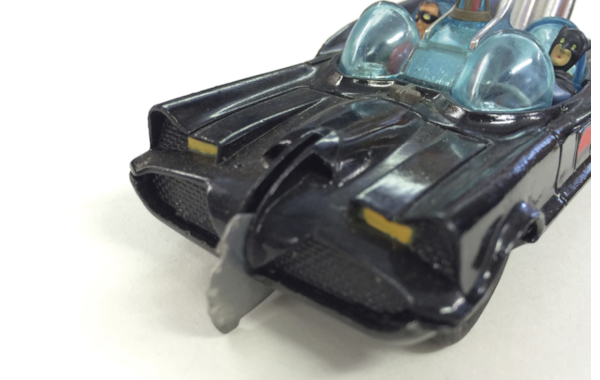 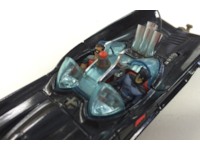 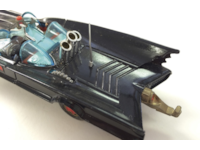 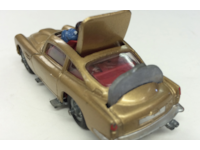 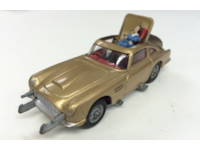 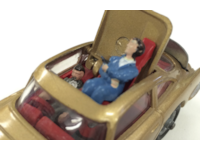 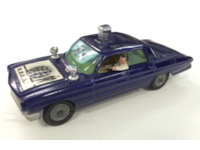 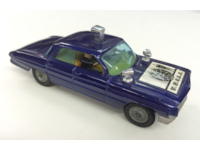 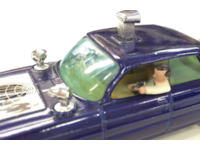 After David Boxall’s interesting mini-series on Corgi’s greatest innovations, it’s been left to the editor to pick up where David left off by looking at some of Corgi’s fantastic innovations in its TV and film offerings. Arguably because of the hi-octane, action-packed and gadget-filled adventures of the on-screen versions of the cars, Corgi really had its work cut out to replicate them in miniature. However, the company was clearly up to the task as its TV and film offerings are some of the most innovative toys it produced.

Corgi’s break into television didn’t get off to the most illustrious start, however, as its first TV and film-themed model was No. 258 The Saint’s Volvo P1800, which was released in March 1965. Yes, it had a little figure of Roger Moore behind the wheel and a Saint sticker plonked on the bonnet but, apart from those touches, this could have been your next door neighbour popping out in his Volvo to pick up the groceries. Despite this, the association with the show clearly helped sales and before it was removed from the shelves in 1970, it clocked up an impressive 1.1m sales.

After a lacklustre start, Corgi definitely set the record straight with its next innovation-packed release: the iconic No. 261 James Bond’s Aston Martin DB5 – although Corgi actually used a DB4 casting… probably due to the lack of time the company had to get the toy ready for Christmas. “When it was finally decided early in the year to include this model in the range, much time had been lost, resulting in an all-panic situation,” explained designer Marcel van Cleemput in The Great Book of Corgi.

Despite the lack of time, Corgi worked hard to include some key play features that were all worked on by different designers in order to save time. These included: an ejector seat and flip-up roof, quick action rear bulletproof shield and flick-out overriders/hidden machine guns. “Individually these features were not difficult to engineer except for the tricky aspect of ejecting the Baddie figure cleanly out through the roof,” recalled Marcel.

“As with all working gimmicks, tests were carried out before release to ensure their reliability. In the case of the ejector seat and flip-up roof, a test rig was built to test the number of times the roof and ejector seat could be operated without failure.” In his book Marcel shows that rig had been operated 20,410 times without breaking.

All this tech came at a price, however, and the model consisted of 28 different parts, which meant that even though No. 261 did make it out ready for Christmas, stock was in massively short supply. Still, that didn’t stop it becoming one of Corgi’s most successful-ever models with almost four million sales in just four years.

With the bar set so high, Corgi needed to follow up the Bond Aston Martin with something equally spectacular in 1966 and, although No. 497 The Man from UNCLE Thrushbuster wasn’t quite as all-singing and all-dancing as its predecessor, it did have quite a neat play feature in-keeping with the show. By pressing a metal switch on the roof of the Oldsmobile, disguised as a ‘rear-view periscope’, secret agents Napoleon Solo or Illya Kuryakin would pop out of the front windows and ‘fire’ their pistols. In turn this would create a clicking noise to simulate the sound of a gun being fired.

“[This was] created by a ‘clicker’ metal spring embossed plate, similar to those used in those small and often brightly printed metal hand clickers that were once so popular with kids. The other feature to the car was a pair of swivelling spotlights in front of the windscreen,” said Marcel. Corgi certainly did a great job of this one, seeing as there was no such thing as a Thrushbuster, so the designers had to use their imagination.

But the best was most certainly yet to come later in 1966, with the release of No. 267 Batmobile. If you thought the Aston Martin was action-packed, then it was certainly equalled by the impressive Batmobile. “I remember well [the] phone call telling me to be ready to drop everything and start work on the very unusual Batmobile,” wrote Marcel. “To manage all we did in nine months, from sight of the first photographs to retailers receiving their first quota, was a great achievement by all concerned, including the designers, patternmakers, toolmakers and all those involved in production.”

The Batmobile had a number of play features: a rocket-firing mechanism, hidden tyre slasher in the bonnet and pulsating flame at the rear. The rockets are perhaps the most interesting as they were fired by rotating a cog just behind Batman’s driving seat. As the cog was rotated the three missiles shot out in succession from three exhaust pipe-style tubes. Trust Corgi to think of everything too and, although the missiles may sound lethal, “these little red missiles were not as dangerous as they sound; they were well rounded and if swallowed, would easily pass through the digestive system.” See? Even in 1966, Corgi was well aware of the perils of ‘elf and safety.

The flame was also simple but effective. As the Batmobile was wheeled along, a little piece of orange plastic moved in and out of the exhaust, just like it was a pulsating fire. Unfortunately this feature had to be removed on later Batmobiles, so owners could attach the new Batboat on trailer – so that’s a clear way to tell if you’ve got an early or later issue. Finally to top everything off, Corgi included figures of the Dynamic Duo sitting behind the iconic bubble-shaped windscreen. The Batmobile went on to sell almost five million units and went through several variations before it was finally withdrawn from stores in 1979.