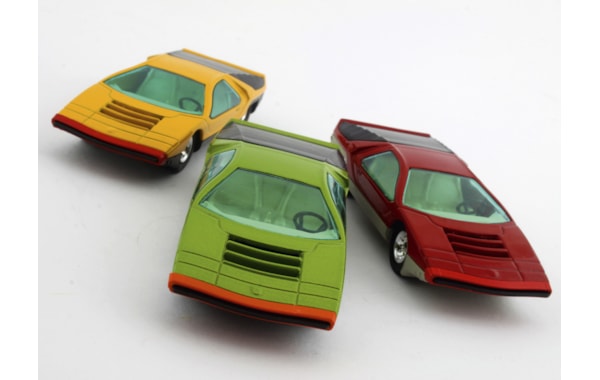 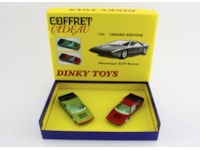 I’d originally intended to start this with a trio of models that really set me off down the road of diecast collecting at a very young age, but here are a trio of my most recent acquisitions – the Atlas Editions re-releases of the original French Dinky Alfa Romeo Carabo issues.

These are actually two releases that yield a mini-collection of three models, all replicating the original No 1426 Carabo Bertone Mécanique Alfa Romeo P33. A solo reproduction of the orange variant, as pictured on the original Dinky Toys box is joined by a rather splendid “coffret cadeau” (gift box) that incorporates the other original Dinky Toys variation in green and combines it with a replication of a pre-production trial version in red with grey base, complete with a matching pre-production trial box with simpler graphics – a lovely touch! Both come in a rather splendid gift box that opens up to make a superb display plinth with slots for the wheels to sit.

As per the original releases, the orange and green versions include a replica road sign in the moulded plastic base but, correctly, the red version doesn’t as a pre-production colour trial was just exactly that so there would have been no need to include the sign at that stage.

The castings are a little rough in places (notably to the slats ahead of the windscreen) but considering how much the originals go for in mint condition, these are more than adequate if you have a penchant for bargains like I do (otherwise known as being on a very limited budget!) and they display really well. Prices vary but these can be picked up on ebay (where I got mine) for around £15-£20 for the single orange version and from £22 to around £50 for the gift box. Always one for sniffing out a bargain, both mine were acquired at the lowest of those figures. Happy hunting!