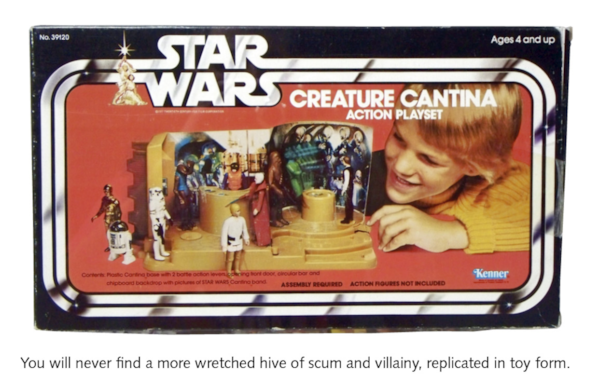 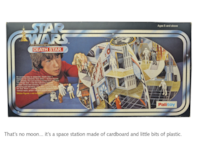 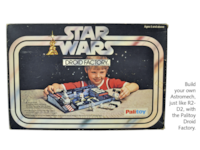 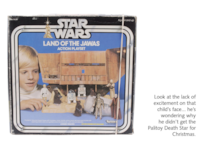 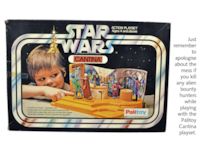 Along time ago in a galaxy far, far away (well, Grimsby in the 1980s, which arguably may as well have been a different planet to the rest of the UK) there was only one thing on my mind – Star Wars! After seeing the original film, my mind had been blown by the adventures of Luke Skywalker and his efforts to bring down the evil Empire. Everything in my bedroom was Star Wars themed, from the bed sheets to the curtains and probably even my underpants. But, of course, my favourite items were the wonderful toys created by Palitoy and also Kenner, with some of the greatest being the fantastic playsets by both companies. Here, we’ll take a look at some of the best and compare the differences between the two manufacturers.

Well, let’s kick things off in style with one of the best and now hardest to find playsets – the Palitoy Death Star, which was originally only available in the UK, Australia and Canada. Released in 1977 the Emperor’s infamous planet destroying super weapon is recreated in cardboard. The large semi-sphere (approx. 60cm in diameter) was big enough to fit action figures inside and featured some wonderful illustrations of key locations from the film, such as the trash compactor, cell block, command centre and rotating gun placement. This impressive beast was held together with 10 plastic clips and also included six special bases for mounting action figures on. Due to its cardboard construction, tracking one down in mint condition nowadays is no easy feat and even spare parts regularly trade for decent prices (particularly in America where the set was never released). Interestingly, Australian toy maker Toltoys made an almost identical Death Star but instead of being made of cardboard, it was recreated in much sturdier chipboard.

Meanwhile in America, Kenner’s take on the Death Star was totally different and instead of being a cardboard sphere, it was more like a plastic tower with card walls. Kenner’s Death Star was the largest and first playset released by the company and had lots of interesting features, such as an elevator that travelled to the different floors, laser cannon and the opportunity to recreate the dramatic ‘bridge scene’ by swinging Luke and Princess Leia over the retracting drawbridge.

If you fancied a more relaxed adventure, then the Palitoy Cantina could have been the thing for you. The Cantina is shown in the first Star Wars film and is the location where Luke first meets smuggler Han Solo. It’s a bit of a dodgy dive full of weird aliens and unusual characters (please, no mentions of Grimsby again). The playset recreated this nicely, with a cool card backdrop depicting the strange drinkers while the plastic base had a sunken ‘bar area’ where your various action figures could stop for a quick pint of Bantha Brew. There was also a cool ‘battle action’ function that allowed Obi Wan Kenobi to whack Greedo the alien in the face with just the press of a button.

Once again, over in America Kenner had a slightly different take on the Cantina. Although the card backdrop was the same, the base was different, which gave the playset some new features, including an opening Cantina door, a mock battle scene between Han Solo and Greedo and a slightly different battle action for Obi Wan at the bar. Kenner’s is probably the better playset thanks to the more interesting action features.

On the subject of differences – one of the playsets with the most obvious differences between Palitoy and Kenner was the Droid Factory. In fact, the only real resemblance between the two is the name. In the UK Palitoy created a factory with a conveyor belt to transport the various droid parts through the different locations within the imaginary factory. The playset did actually come with droid parts to allow you to build the little robots yourself. For completists, it’s worth noting Palitoy produced a version with a yellow plastic base and also a blue one.

Meanwhile, across the Pond, Kenner decided its Droid Factory would use a crane to carry the robot parts around, rather than a conveyor belt. The base was brown with steps going up one side and the large crane in the middle, which could be moved around. Like the UK version, the factory came with interchangeable plastic parts that could be used to make five different robots. These small parts are easily lost, so finding a mint set with all the pieces can be quite tough. Also, it’s worth noting that Kenner re-released the Droid Factory as The Jabba the Hutt Dungeon when Return of the Jedi hit cinemas in 1983. This version included typical action figures, rather than robots you could build yourself.

Another one of the more unusual playsets was the Land of the Jawas, which sounds slightly more impressive than the reality of what the toy delivered. One of the early scenes in Star Wars features the dwarf-like hooded Jawas who travel around in their massive Sandcrawler vehicle selling and buying robots. Luke and his uncle Owen purchase R2-D2 and C-3PO from the Jawas and this scene could be recreated thanks to the playset. As for the playset, there’s a card backdrop of the Sandcrawler, with working elevator to take the droids away, and a plastic base to represent the desert-like landscape of the planet Tatooine.

Although the American version was virtually identical, the Kenner take on the so-called Land of the Jawas included a much better plastic base with caves for the Jawas to hide in and a neat replica of the crashed pod that C-3PO and R2-D2 used to escape from Princess Leia’s spaceship after Darth Vader invaded. So good was the base that Kenner decided to reuse it for the later Hoth Ice Planet and Rebel Command Center sets.

Sadly that was it for the Palitoy playsets, as Kenner began to produce the majority of the Star Wars merchandise from Empire Strikes Back onwards, while Palitoy basically became just a marketing and sales department rather than a toy producer. However, that’s not to say the later playsets were no good and in a future issue of Collectors Gazette we’ll review the Kenner playsets released for Empire Strikes Back and Return of the Jedi. May the collecting Force be with you…

Do you have a Star Wars collection? Our price guide might be able to help you value it... https://www.collectors-club-of-great-britain.co.uk/articles/articles//star-wars-price-guide-kenner-vehicles-and-playsets