Visionary Volkswagen Golf has the future in its DNA 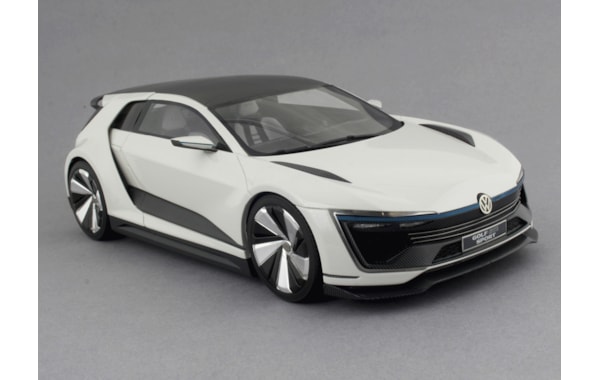 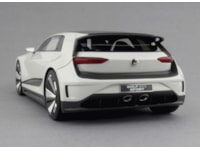 Presented for the first time at the legendary Lake Wörthersee VW GTI event in 2015, Volkswagen's hi-tech Golf is largely made of carbon and is powered by a total of three motors combined into a plug-in hybrid unit with all-wheel drive, and features a lightweight body, optimum aerodynamic downforce, running gear based on the design of the Golf GTE and a new style 'cockpit'. The concept can cover a distance of up to 50 kilometres on electric power alone.

The 1.6 litre petrol-powered engine element is adapted from the Polo R WRC TSI engine and is located at the front. This is complemented by two electric motors and, in sporty "GTE mode" all three motors work together.

The Volkswagen Golf GTE Sport Concept is a DNA exclusive at 1/18 scale, enlarging its impressive concept car range. Produced in a run of just 320 (each chassis is individualy numbered), the model is correctly finished in Pearl White with a largely black interior.

Beautifully crafted in resin, the finish and the crispness of detail is truly out of the top drawer, something DNA has rightly earned a reputation for - an impressive feat for such a young company.

The replication of the exposed carbon, most obviously visible on the roof, is absolutely incredible and so realistic that you have to look really closely to fully appreciate it's beauty. The front and rear splitters look amazing too.

Despite the fact that, being a resincast, the doors don't open the interior has not been skimped on - far from it, the detail that has gone into this model is astonishing.

I'm not often lost for words but I'm running out of superlatives here!