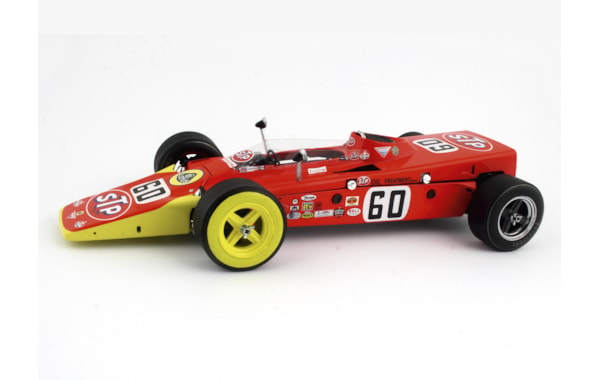 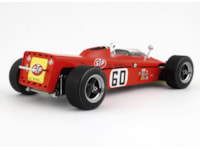 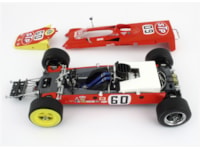 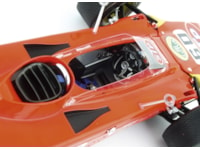 Designed by Maurice Philippe, the Lotus Type 56 was a gas turbine-powered four-wheel-drive racing car, built for Team Lotus' STP-backed entry in the 1968 Indianapolis 500. The Type 56 used a modified version of the ST6 gas turbine used on the STP-Paxton Turbocar ("Silent Sam") that had almost won the event in 1967 and was based on the Pratt & Whitney Canada PT6 aircraft engine that became one of the most popular turboprop aircraft engines in history.

Four Type 56s were built and Mike Spence was killed testing at Indianapolis. The remaining three cars with Graham Hill, Joe Leonard, and Art Pollard were entered for the race, with Leonard claiming pole position in the number 60 car modelled here - Hill's car crashed, Pollard's car broke down, but Leonard was leading with just a handful of laps remaining when the a fuel pump failed.

The 56 design was later raced in Formula 1 on six occasions in 1971, including three non-championship events, but, with no refuelling allowed, the large fuel tanks needed left it overweight and uncompetitive.

TSM's sumptuous diecast replication is an absolute joy to behold, with the company's attention to detail shining through on this model. The upper body can be removed in two parts, with the nose separate from the main body section. Doing this reveals some truly astonishing detail to the cockpit and ancillaries, but taking it a step further and removing the white shroud behind the roll bar unveils the turbine itself.

An incredibly special model and even though it wasn't victorious at Indy in 1968, it's definitely a winner here.