Something new from Italy: Officina 942 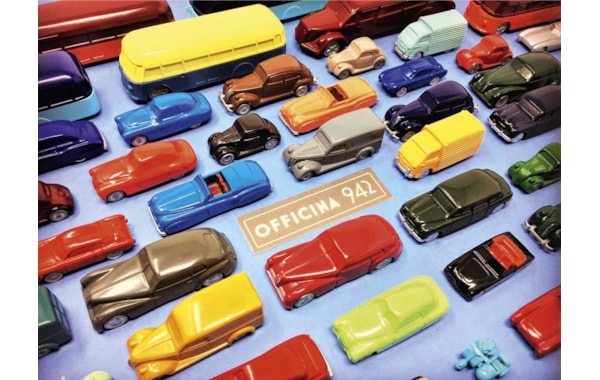 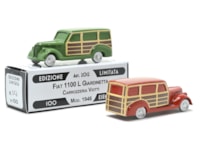 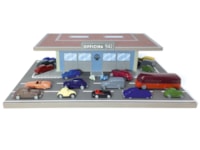 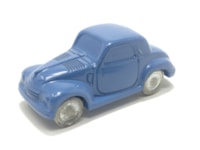 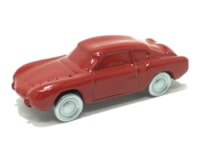 We examine a new range of 1/76 scale diecast and resin models from Italy, and talk to the founder, Alessandro Sannia

Turin in Northern Italy, where the headquarters of Fiat are situated, has also been the home of many famous Italian coachbuilding companies and, incidentally, is where the diecast manufacturer Mercury was founded in 1932. With such a heritage, it is not surprising that a newcomer to the Italian model car scene, called Officina 942, is also based in Turin.

Many of today’s diecast models are reissues, or, more precisely, replicas of famous brands of the past and, as we saw in the May issue, Mercury is one of the latest to appear in the form of a partwork series. Officina 942 offers something rather different. The idea is not to make exact recreations of toys of the past, but rather to capture their spirit. Thus, a whole new series of original models is being offered, created in the style of late 1940s toy cars, with solid cast bodies and no window cut-outs. These are in 1/76 scale and their appearance bears a certain resemblance to early Wiking plastic cars or, perhaps, the heavy metal Schuco-Piccolo series, though the latter have ‘windows’ painted in silver. While these makers naturally favoured German prototypes, the Officina series is made up of Italian subjects.

This interesting venture is the brainchild of an Italian automotive historian and model collector, Alessandro Sannia. In 2010, he founded a small publishing house called Il Cammello devoted to motoring books, particularly covering lesser-known aspects of Italian motoring history, such as the smaller coachbuilders like Carrozzeria Moretti and Carrozzeria Riva.

The name chosen for the new range of models won’t mean much to English speakers, but it gives some insight into the thinking behind it. A quick look at an Italian dictionary shows that ‘officina’ means workshop, but what about the numbers 942? This takes us back to the 1930s, when a grandiose exhibition centre was planned in Rome to host the planned 1942 World’s Fair to be held there to showcase the nation’s industrial and other achievements. Construction was halted by World War II and the event was eventually cancelled. The reference to 1942 in the name of the model range is, says Alessandro, “a little historical joke - mine are the models that might have been made in Italy in the 1940s if the war had not taken place and the toy industry had developed better, as it did in the USA”.

Nowadays, most model car diecasting is subcontracted to China and this is the case with Officina’s 1000 series. The vehicle bodies are mounted on a cast chassis incorporating the wheels, which do not rotate.  Some of the smaller items, such as the Vespa scooter, are made in Italy by a process known as ‘spin casting’, using a rubber mould. The 2000 series, offered in limited editions of 100 pieces, is also made in Italy, this time in resin. Assembly, finishing operations and packaging and distribution are all carried out in Italy.

The subjects chosen basically fall into two categories - the familiar and the obscure. The car that brought motoring within the reach of ordinary Italians was the Fiat 500 Topolino, introduced in 1936, and the pre- and early post-war variations (500A, 500B and 500C) have all been modelled. Naturally, the next generation ‘Nuova 500’ of 1957 finds a place in the range too. The late '40s Fiat 1500 saloon and 1100BLR van would also have been familiar enough on Italian roads as would the Fiat 600 Multipla of 1956, but the remainder of the range shows a preference for less obvious subjects that Alessandro discovered in the course of his publishing work on Italian coachbuilding companies. It is here that the real originality of the range lies.

Every country has had specialist coachbuilders, from the specially-bodied Citroëns by Chapron of France to the sumptuous Rolls-Royces from British companies like Hooper and Park Ward. Such cars were, of course, expensive and exclusive, but things were rather different in Italy where, in the words of motoring historian Elvio Deganello in his book Italian Coachbuilders: The Masters of Style,  the era of the Italian coachbuilders was “a unique and unrepeatable phenomenon in automotive history”. The Italian motor industry was dominated by Fiat, who mass-produced affordable cars that, out of necessity, were rather lacking in individuality. This provided an opportunity for coachbuilders to create stylish and sporty bodies with run-of-the-mill Fiat mechanicals underneath. Obviously, there were also many exotic Ferraris and Maseratis with special coachwork for wealthy customers, but there were far larger numbers of coach-built Fiat coupes and convertibles sold on the home market. In the mid-1950s some twenty different companies of this type produced about 6,000 cars a year.

It is from this aspect of Italian motoring history that Officina 942 draws inspiration. Many of the models are special bodies based on Fiats, such as the 1946 Fiat 1100L Giardinetta (station wagon) with coachwork by Carrozzeria Viotti, a company active between 1921 and 1964. This has been produced in green or red and has a very attractive woody finish. In the same fashion, the Fiat 1400 saloon is modelled as an elongated ‘President’ limousine of 1951, based on bodywork by Francesco Lombardi, an Italian aviation pioneer who founded his own aircraft company, Avia. After World War II, Italy, as a defeated country, was forbidden to build aircraft, so Lombardi turned to vehicle coachwork instead.

Yet another Italian coachbuilder was Monviso, who rebodied the 600 Multipla as a light delivery van with a ribbed metal rear, a bit like the better known Citroën H van.  In 1954, the Monviso workshops were taken over by Ghia, a much more famous name. In the forties, Ghia specialised in flamboyant shapes that partially concealed the front, as well as the rear wheels – sacrificing practicality to appearance, as such an arrangement caused certain difficulties for steering.  These exotic cars would be exhibited at events, such as the annual concours d’elegance at the Villa d’Este on the shores of Lake Como where one of the models chosen by Officina 942, the Fiat 1500 Super Sport Cabriolet, was shown at the 1946 event. Moulded in resin, this has been produced in either blue or salmon pink.

The inaugural model in the resin 2000 series was a 1949 Siata Amica sports in black with red interior, produced in 100 pieces and now sold out. Siata was another Turin-based company specialising in racing car accessories and conversions, founded by Giorgio Ambrosini in 1926. Trying to expand its business, at the end of the 1930s it had started producing an elegant convertible based on the Fiat 500A, called Amica, with bodywork made by Bertone. The idea was then resumed after the war, with the Amica 49 using the engine of a Fiat 500C mounted on a platform frame made of square tubes.

These are just a selection of the models available, but by now it will be clear that much can be learnt about the history of Italian coachbuilders from the Officina 942 range.  Any new product line is bound to evolve, especially as Alessandro Sannia is keen to respond to the tastes of his customers, and at the moment his models of Italian buses are proving particularly popular. The first of these was a 1939 Fiat 626 with a body split horizontally that facilitates two-tone finishes. Then came a two-tone green Fiat 672F Filobus (that’s trolleybus in Italian), as used in Rome and Turin, whose size surprised some collectors - a real one was twelve metres long and the model measures 16cm, about the length of four of the little Fiat 500 models placed end to end. The trolleybus proved so successful that all examples have been sold, and Alessandro has made it clear that re-runs of limited issues will not be made. Nevertheless, the bus theme has been expanded with a streamlined 1938 Alfa Romeo 85A with Orlandi bodywork, with another unusual subject to come, the 1938 OM Titano Gran Turismo Panoramica from Carrozzeria Varesina with twin rear axles and a raised rear deck in observation coach style.  There are plenty of other ideas on the drawing board, too - Viberti’s futuristic ‘Golden Dolphin’ coach of 1955, a Fiat 682 tractor unit that will appear with various trailers, starting with a car carrier, and a series of early Formula 1 racers will start with the Maserati 4CLT, Ferrari 125 GPC and Alfa Romeo 159.

A perennial dilemma for collectors is how to display their models effectively. Do they look best in dioramas or sitting on top of the boxes? Officina 942 has a solution to this too, and has created a novel display plinth with road markings and a garage building with a roof that cleverly lifts up so that twenty-four of the boxes can be stored inside.

Though distributed in various specialist model shops in Europe, British collectors are mostly likely to purchase these models online from officina942.it. The 1000 series cars cost 12 € and the 2000 series 15 €, with buses and the garage being more expensive.  Initial reception of the Officina 942 marque has been very positive - in the words of Enrico Sardini, who runs a model shop called Tiny Cars in Milan, “they’re selling like hot cakes!” Definitely a range to keep an eye on for the future.