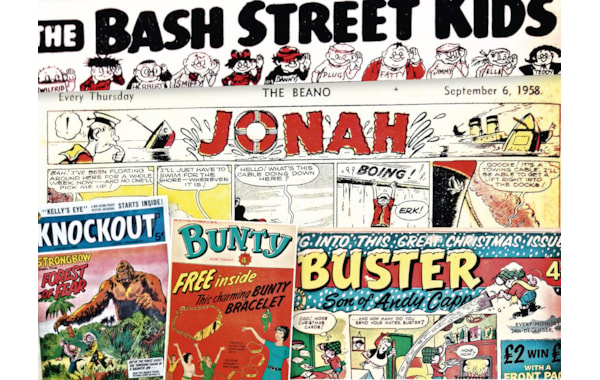 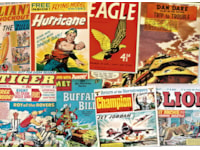 In the early 1950s things began to get really interesting when Fleetway, D.C. Thompson and others began producing their own new high quality comics, with strips rather than stories. These fell into two categories: those that used coloured, sometimes glossy, covers such as Eagle, Rocket, Swift, Girl Express Weekly, Zip, and Lion, Tiger, Beezer, Topper, Girls Crystal and School Friend which just used newsprint and full or partial colour without the glossy covers.

The comics that really changed the industry forever, and led the direction of humor/adventure comics in for next three decades, were D.C. Thomson’s Beano and Dandy in the early 1950s and The Beezer and The Topper in the mid 1950s. The list of stellar comic characters that were created and appeared in these comics over the next 15 years or so is iconic to say the least. Leading the comic industry in ground-breaking innovation and mayhem who could possibly forget Denis the Menace, Beryl the Peril, Little Plum, Jonah, The Banana Bunch, Ginger, Three Bears, Roger the Dodger, Corporal Clott, Figaro, General Jumbo, Bash Street Kids, Grandpa, Q Bikes, Billy Whiz and Billy the Cat to name just a few. Comics of a similar genre by different publishers could not compete and many fell by the wayside in the late 1950s and early 1960s - publications such as Radio Fun, Film Fun, Knockout with Billy Bunter and other long running comics bit the dust.

There were exceptions of course, the Buster comic from Fleetway in May 1960, did combat the D.C. Thomson power house of comics led by Buster himself, with a supposed version of a young Andy Cap leading the way. Apart from Buster, major characters in the comic also included Turtle Boy, Phantom Force Five, Sea Hawk, Warlord of the Sioux, Black Axe, Wagon Train, Rip Kerrigan, Squad Car 13, Galactus, The Shrinker, Dome of Doom, Strongbow the Mighty and Morecambe and Wise. It was another ten years before Cor!! arrived on the scene to support Buster. While not published under the Fleetway or IPC banner, the Odham’s Power Comics (Smash, Wham, and Pow), was driven by two of the very best British humour artists they had stolen from D.C. Thomson (Leo Baxendale and Ken Reid). Together they put a large dent in sales beginning in 1964 with Grimly Feindish, The Nerves, Queen of the Seas, Bad Penny, The Swots and The Blots, plus many, many more.

Some other comic publishers were virtually asleep at the wheel and not attempting to re-energise their publications to compete with the Thomson comics. Instead it appears that they focused their attention on revitalizing their stalwarts. The Lion and the Tiger were re-energised with new characters such as Karl the Viking, Zip Nolan and Maroc the Mighty. While the Tiger rolled out a new artist on Roy of the Rovers (based on Bobby Charlton), Olac the Gladiator, Jet Ace Logan, Billy’s Boots, Johnny Cougar and Suicide Six. Brand new comics such as Boys World, Rocket, Express Weekly and Ranger aimed at teenage boys hit the newsstands in the early 1960s but were not really aimed at combatting the D.C. Thomson comics.

Undoubtedly one of the best boys comics to come out in the ‘50s was the Eagle, with its glossy photogravure cover, introducing one of British comics’ most famous and certainly longest lasting comic icons - Colonel Dan Dare!

The Eagle, because of its high quality paper and printing process, was expensive to produce in comparison to the other newsprint comics, and without doubt was aimed at the largely prosperous middle class that was developing in Britain during the 1950s. The sales were phenomenal, outstripping most of their rivals and highlighted the old adage that “quality sells”.

Interestingly the focus in mainstream comics, both in Britain and the US, was broadly the same in terms of genres: cowboys, historical, sports, funnies, action, adventure, horror, detective horror and sci-fi. The glaring difference was of course superheroes, they never captured the interest of the mainstream British readership. But then, in 1954, with issue number 25 of Captain Marvel, came the first Marvelman comic by minor publisher Len Miller and Sons Ltd. Produced by Mick Anglo studios in an American format, this was the only truly semi-successful British superhero comic in sight. The  character was a hastily devised replacement for the American Captain Marvel reprint comic that they were publishing and distributing with the agreement of Fawcett Comics in the U.S.A. …That is until DC Comics sued Fawcett for copyright infringement regarding Superman and won, and Captain Marvel was no more!

Unsurprisingly without the distribution network of the major publishers Marvelman never really hit the big time, though in later years it has certainly developed a cult following!

Many of the characters in the British comics found their way into annuals, which as the term suggests were published annually. These were brand new stories collected together into a bound volume usually about 150 pages in length, and sold at in time for your Christmas stocking.  I can tell you that there was nothing better than waking up on Christmas morning to your favourite comic characters in a huge annual.

Having completed my overview of the big two publishing groups and minor publishers, there are some other comics that I just have to mention… One of the very first British TV shows to appear in a mainstream British comic was Muffin the Mule. First appearing on our screens in 1946, this show made the transition to comics with the publication of the T.V. Comic in 1951. Of course there were toys, books, annuals, and games associated with Muffin, and this laid the foundation for future endeavors. Others quickly followed such as Sooty, Larry the lamb, Noddy, Rag Tag and Bobtail, Lenny the Lion, and Bengo the boxer puppy in Express comic in 1956.

Twizzle was the very first of Gerry and Silvia Anderson’s creations to reach the small screen in 1957. Although never appearing in a comic there was a Twizzle annual, a Pelham puppet and some card games. Twizzle made way for Torchy (the battery boy) in 1959, which also had annuals and gift books, but no puppet or toy that I have ever seen? Next on the list was Four Feather Falls and here at last an Anderson’s creation made it into T.V. Fun Comic in 1961. This comic ran for 32 years from 1951 – 1983. In its pages appeared some of the best children’s television shows of all time, including the very first Anderson space feature to appear in a British comic. Supercar which first appeared in T.V. Fun Comic in 1961 and was the forerunner of the vast Gerry Anderson merchandising machine, with everything from an egg cup to a pilot’s license. But it was soon replaced by Fireball XL5 in 1962 whose popularity produced even more merchandising - some of it advertised in the comics.

In January of 1965, the first T.V. Century 21 comic in association with City Magazines appeared. Full of fantastic artwork by some of Britain’s best artists it drained away the heart of the T.V. Fun Comic, and was the first comic to spotlight the Dalek’s from Doctor Who. Fortunately to combat its loss Space Patrol created by Roberta Leigh and Arthur Provis, brought their series to the small screen before it shortly moved across to T.V. Comic in 1965. This was bolstered by the addition of Dr. Who in the same year. These popular shows were quickly followed by the Avengers  and Adam Adamant.

In truth, T.V. Comic was never able to close the gap on the City Magazines publications who added Lady Penelope (later in her own comic), Stingray, The Saint, Captain Scarlett, Joe 90, Land of the Giants, and Star Trek. Merchandising was regularly advertised in these comics. Other T.V. series to appear in British comics includes Man from Uncle, Avenger’s, and Jane Bond.

From the tenor of my article I hope you can see that I believe that many British comics were of a very high standard, different from their US counterparts but full of quality in their own way, with some excellent artwork which was almost always drawn, inked, lettered and often coloured by the artist himself in Britain. C