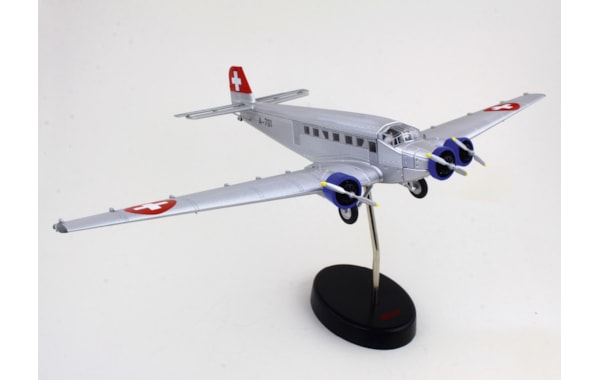 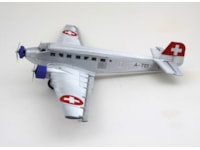 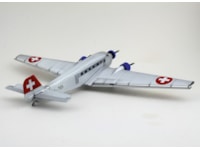 Nicknamed "Iron Annie" by the allies during World War II, the Junkers JU-52 was designed primarily as a transport aircraft and first flew in 1931. During prototype testing, it was decided that more power was needed, as well as the safety of having more than one engine.

With its original engine mounted in the nose, this was kept in situ and a further two radial units were installed, one on each of the wings. The new tri-motored design took to the skies in 1933 and proved to be much-improved.

The JU-52 featured an unusual corrugated duralumin metal skin that had been pioneered by Junkers during World War I - the corrugation served to strengthen the whole structure compared to a smoother surface, but without much aerodynamic efficiency lost. The fuselage basically of rectangular section with a domed upper surface, comprising a tubular steel structure that was entirely covered by corrugated metal.

Both passenger and, later, miltary transport versions were developed, and the aircraft was in production until 1952.

Schuco's replication of this important aeroplane is nothing short of superb. With the main structure being fully diecast, the model has an incredibly weighty feel to it. At first glance, the slim metal tubular stand looks as if it might not be up to the job of holding this beautiful bird aloft, but it most certainly is, and very good it looks too.

Whilst the Swiss Air Force livery is simple, the silver paint finish is flawless and what graphics there are look stunning. The engine cowlings are correctly painted blue too. All three props spin freely.

In the cockpit, there are pilot and co-pilot figurines, ready to take your model up for a spin - these are clearly visible through the cockpit windows.

This truly is a superb model and worthy of every penny. A top effort by Schuco, it is thoroughly exquisite.