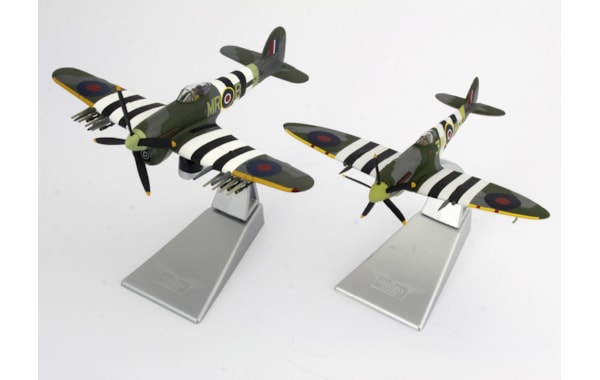 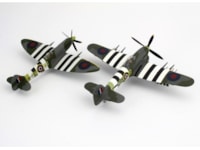 Corgi's commemorative D-Day models have begun to appear and come in boxes featuring special artwork for the 75th anniversary of one of World War II's most significant events.

The aviation pedigree of the Supermarine Spitfire is second to none. Produced in greater numbers than any other British aircraft, the Spitfire was in constant production throughout World War II, with the basic airframe capable of readily accepting upgrades and improvements which maintained the aircraft’s position as one of the most capable single engined fighting aeroplanes of the conflict. The combination of the classic Spitfire airframe and the new powerful Rolls Royce Griffon engine produced a ‘Super Spitfire’ and what was regarded by many aviation historians as the finest low altitude interceptor available to Allied air forces at the time. Having contributed to offensive operations in support of the D-Day landings, the speedy Spitfire Mk. XIVs of RAF No.322 Squadron were given a dangerous new task in the weeks which followed, intercepting the indiscriminate V1 ‘Doodlebug’ flying bombs which were hurled against southern Britain.

If the Douglas C-47 Skytrain is considered the most famous multi engined aircraft of D-Day aerial operations, then the single engined equivalent must be the fearsome Hawker Typhoon. Agile and extremely heavily armed, the Typhoon was to see plenty of action during the summer of 1944, either attacking strategic targets in the weeks prior to invasion, such as German radar sites, or providing invaluable close air support to ground units breaking out from the landing beachheads. With forward air controllers installed with ground units throughout Normandy, RAF Typhoons were ready to respond to any request for aerial support, with aircraft not already engaged in strike missions holding off the coast of Northern France, ready to be called into action. These missions proved to be incredibly hazardous for Typhoon crews, not so much down to the attention of Luftwaffe fighters, but from the murderous anti-aircraft fire hurled in their direction.

Both models are packed with superb detail and feature a truly excellent finish with those D-Day invasion stripes dominating of course. As always, with Corgi's aircraft, each model comes with its own stand and optional parts to display the undercarriage up or down. Absolutely gorgeous and a fitting tribute to the events of June 1944.