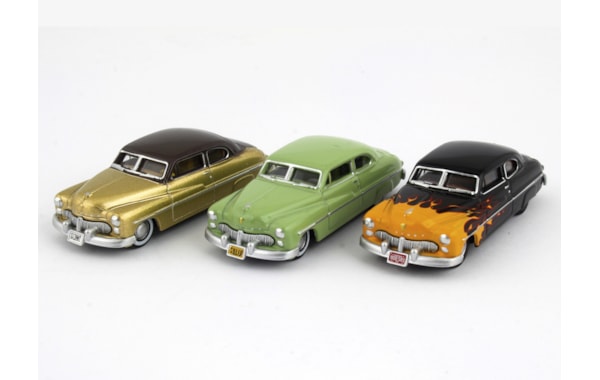 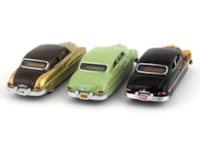 Three completely different takes on the Mercury make up this 1/87 scale set from Oxford’s US Classic Cars series in celebration of the 70th anniversary of the launch of the marque in 1949.

The first model (on the left in these pictures) is in Lima Tan and Haiti Beige and represents a two-door coupé registered in Kansas (The Wheat State) as 11-3987 in 1949 and features whitewall tyres.

The second model in the set (centre) is decorated in a muted green with lots of contrasting chrome. The interior is also a soft green with a pale grey steering wheel. Once again it features whitewall tyres and carries a registration plate FA 9110 from Texas in 1949.

Last but not least is a Hot Rod version of the Mercury (right) in black with blazing yellow and red masking working from the bonnet halfway along the length of the car.  Registered 800 581 from Indiana, the car features silver wheels with red rims and brown interior seating. The Mercury badge sits prominently along the front edge of the bonnet and above the rear number plate.

The varied and colourful versions of the 1949 Mercury in this celebratory set make it a perfect gift for any collector of American classic cars of the post-war period.

Oxford's lovely 1/87 scale Mercury casting in these three fabulously different colourways certainly makes for a truly delightful set. All three are beautifully finished with delightful 'chrome' trim to the body sides and around the windows, as well as the bumpers too of course.

The realistic number plates are always a nice touch on these US models as well.

This is the second set at this scale after the Chevrolet set released previously and long may these wonderful mini-collections continue.