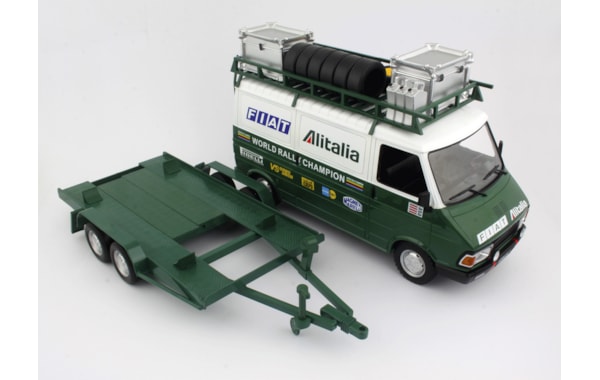 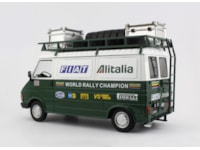 Fiat's 242 van was introduced in 1974 and was the result of a collaboration with Citroën (marketed by the French company as the C35). Both vehicles were produced in Italy until 1987 with Fiat engines, and then in France by Chausson, when Fiat discontinued the 242. Citroën retained the model until 1992.

With its impressive top level rally programme, the 242 was an obvious choice to provide support for the factory cars at events around Europe. Adorned with the evocative livery of Italy's then national airline, Alitalia, the team was very successful with its 131 Abarths, homologated specifically for rallying. The 131 began production in 1974 too so would be the ideal model to source to complete this marvellous set up.

The model, or I should say models as the trailer is a separate part obviously, is very well made indeed. The combo comes in a lrge box, as you can imagine, with three individual boxes inside - one for the van, another for the roof rack and the third for the trailer.The van is mainly diecast (the roof section is plastic, as are the chassis and interior) making for a good heavy model. The roof access ladder comes wrapped separately so will need affixing once the roof rack is in place.

The roof rack features four spare wheels (with tyres fitted), six spare tyres and two large tool/storage boxes. This section is all plastic, apart from the rubber tyres, of course, and fits easily onto the roof by way of four legs that slot into pre-drilled holes in the roof section.

A real winner from Ixo and great value at this price, too all you have to do now is to decide on a suitable rally model for this delightful combination to tow on the trailer and you're ready to roll.