Does the launch of Oxford Diecast's Bloodhound missile set hit its target? 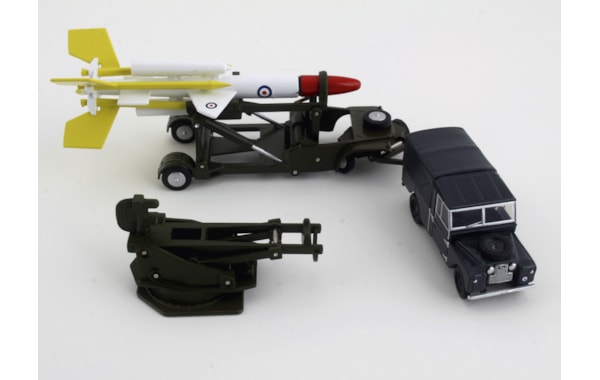 Do not adjust your sets, this latest offering from Oxford Diecast does indeed look incredibly familiar and you're not mistaken for thinking so because it is intentional.

The Bristol Bloodhound was a British surface-to-air missile developed during the 1950s. It served as the UK's main air defence weapon into the 1990s and was in large-scale service with the Royal Air Force.

Part of sweeping changes to the UK's defence posture, the Bloodhound was intended to protect the RAF's V bomber bases to preserve the deterrent force, attacking bombers that made it past the Lightning interceptor force. Bloodhound MkI entered service in December 1958, the first British guided weapon to enter full operational service.

Harking back to his earlier days at Corgi, Oxford's Lyndon Davies unashamedly admits that this was inspired by one of Corgi Toys' most classic gift sets, GS4 - even the wording on the outer box is identical! Comprising a Bristol Bloodhound missile with its loading trolley and launching ramp, and a Series I LWB Land Rover in RAF livery, the only thing is missing that would make this a scaled down version of the old Corgi release is that there is no hardstanding for the launching ramp. This does appear on the box artwork though, so perhaps it was originally planned to be included.

Both the towable loading trolley and the launching ramp have working mechanisms, adding to the feel of the set this was inspired by, and the colours used are the same as the old Corgi issue too.

One thing that is different though is that the missile is plastic and this extends to the tip too, something that has proved to be a problem over the decades on the Corgi set as the original rubber tip has perished and many are either missing or have reproduction parts - but there will be no problem with any of this with Oxford's version as the tip is firmly glued in place.Sadly a concession to modern health and safety practices is that the missile can't have the correct sharpened point and is rounded off instead. It is understandable though and it doesn't really detract at all from the look of this evocative release.