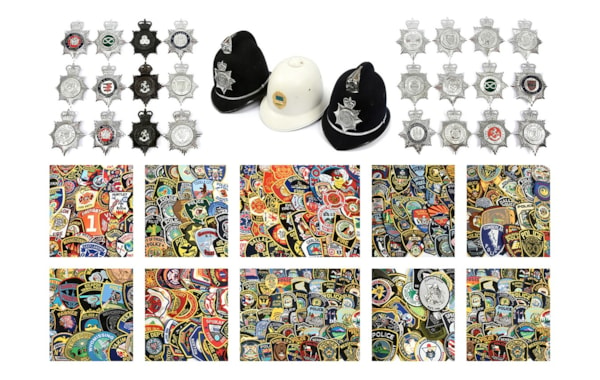 The largest collection of Law Enforcement Insignia in the world is to go under the hammer at Vectis Auctions.

The haul of over 10,000 pieces forms part of an emergency services collection amassed by former Redcar resident Rick Doyle over several decades. Having spent over 30 years in military service his interest was sparked for collecting military and service insignia.

There are sew on police badges, metal pins, helmet crests and mini replicas which were often sold for charity from all over the world. The largest section is from the USA and covers all the major State, town and settlement Police Departments, examples include: Mohegan Tribal Police, New York PD 9/11 commemoratives, Department of the Interior - Bureau of Indian Affairs Police plus numerous other examples from the UK and other countries.

The collection was recognised in 2006 with the awarding of an Official World Record Certificate for the ‘World’s Largest Collection of Law Insignia’. A Cleveland Police Inspector at the time had the unenviable job of counting the 8,000 plus individual pieces for the world record attempt.

Simon Clarke, Vectis Specialist on Military and Law Enforcement collectables said “Richard was extremely proud of his collection, sharing it with friends and other collectors. It was on display at the Dorman Museum in Middlesbrough for a period of time sparking much interest. His World Record was another great achievement for him. In addition to the US and UK items there are rarer items such as the Palestine Liberation Organisation, White Horse Guards and Tribal / Indian Reservation Insignia. Other emergency service, fire and military items also feature in the sale which belonged to Richard such as headgear, uniforms, accessories and more unusual articles such as FBI badges”

Sadly, Richard has now passed away and his family have taken the decision to make the collection available for other enthusiasts. It is to be sold in the General Collectable Auction at Vectis will be online to reach a worldwide audience.
For more information please contact Simon Clarke on +44 (0) 1642 750616 or simon.clarke@vectis.co.uk