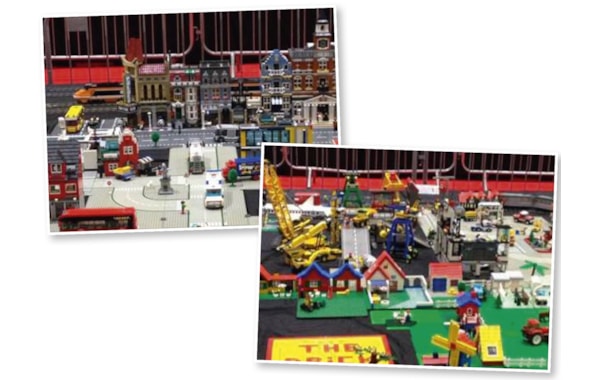 In October this year, Vectis Auctions will hold its first dedicated Lego Auction Sale, which is predicted to be the largest of its kind in the UK.

The majority of this Lego sale is made up of the lifetime collection of Stockton based Lego builder and exhibitor Mark Willis, who for many years has created intricate and astonishing dioramas for the enjoyment of others.

Mr Willis, who is well respected within the Lego community, has previously exhibited at York, Wakefield and London and was the subject of an episode of the popular BBC TV program ‘Collectaholics’, which featured his vast amalgamation of over 350,000 individual pieces.

Recent works have included a model of Saltburn Pier which was on display at Kirkleatham Museum near Redcar. One of his proudest presentations was in 2015, when he created a Lego Town complete with cinema showing “Three Clicks and a Snap”, a football stadium, harbor and railway lines.

The sale includes something for everyone; from loose pieces expertly sorted into colour, size and type in individual containers, to unopened sets and Lego Robotics (Mindstorms) accompanied by a computer to run the Windows 95/98 system required for this. The model sets are branded buildings and architecture. There are also several made-up pieces including the Red Barron, a German WWI plane and its counterpart British Sopwith Camel plane.

One of the most interesting lots in the sale is Lego buildings from the personal collection of Lego Designer Daniel Krentz, complete with certificate.

Daniel August Krentz was a retired LEGO designer who was born and raised in the USA. A childhood interest, which continued into adulthood, resulted in him being recruited to be a designer in Billund, Denmark. He was both the first AFOL (adult fan of Lego) and the first non-Dane hired to be a designer by the company.

Daniel was the designer of many LEGO sets in his time but among his most iconic sets are:
375 Classic Yellow Castle (and all the castle sets that launched with it), 6067 Guarded Inn, 6073 Knights Castle, 6074 Black Falcons Fortress and 6078 Royal Drawbridge.

Lego has been an iconic toy since its inception in 1949, its name being derived from the Danish word ‘Leg Godt’ meaning Play Well.  Carpenter Kirk Christiansen had begun making wooden toys in 1932 but it was his launch of the ‘Automatic Binding Bricks’ that catapulted the company in to the history books. Initially only five colours were produced, today there is a rainbow of 60 colours used in over 3,700 elements.

The sale on Friday 4th October will include other Lego lots such as Technic, Disney, Pirates of the Caribbean, Christmas Specials, Harry Potter and other themed sets.

A full pictorial catalogue is now available online prior to the auction at www.vectis.co.uk.

29 May 2020
Tweets by Collectors Club Of Great Britain