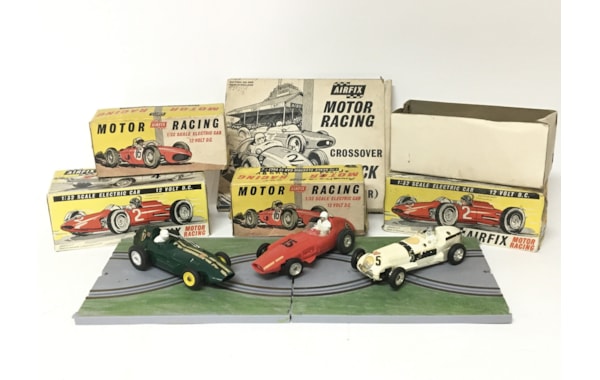 They say that it’s an ill wind that blows nobody any good… and I wonder, given our current fiscal uncertainties and the potential resurgence of the pandemic, whether people are now beginning to offload their collectables whilst the going’s good. It could thus be a great time to grab a bargain.
Stacey’s recent sale featured some truly great lots; how about the Corgi Silverstone Gift Set 15? One of the truly iconic diecast packages, everything was boxed and it was knocked down for £700. A bargain or what? Equally, the Monte Carlo Rally set wasn’t quite mint but it was all there, including that lovely scenic backdrop; this achieved just £250. And a mere £85 was enough to secure the Budgie Gift Set 5, which comprised five commercial vehicles, including a rather good lumber carrying articulated lorry. All this was in a good box, too.

The Dinky Toys racing cars set (No 4) with its five 1950s vehicles was most acceptable and the box, although a little marked, was also worth having: this was bid to £400. And for lovers of the most collectable Dinky sets, the Goodwood Sports Car set (No 121) appeared not once, but twice: the first set was complete with cars and figures and the stepped box insert, and was contested to £750. The second set was minus its insert, although cars and figures were present. That insert made the difference, for this example closed on £270. There was also a boxed Set 33, a Mechanical Horse with four assorted trailers in excellent condition: not too common when mint, it stopped on £340.
A good number of early Dinky trade boxes also crossed the rostrum: a sextet of AA Patrol Motorcycles made £150 while six Shooting Star jet fighter aircraft were bid to £90. Half a dozen dark blue Police Huts realised £110 and six Electric Trucks with drivers finished on £100.

Someone clearly was having a Subbuteo clear-out: no fewer than 23 large lots went under the hammer and several lots went for over £200. And for those of you who like the pewter vehicles from the prolific Danbury Mint company, over 70 were included in one lot: someone scooped them all for £120, which in my book made them worth about £1.50 each!

A terrific line up of Spot-On included a TR3 in red (£300); a Fire set with Tommy Spot (£800); and a four sports car presentation set (£750). There were also sundry roadway parts and pavements and other urban accessories.