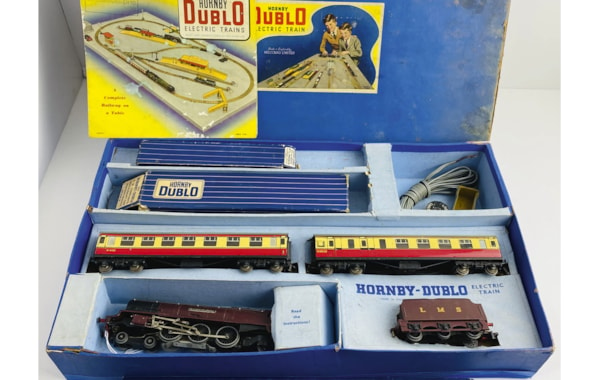 For lovers of steam, electric or diesel, the recent auction was pretty much focussed on the railway genre

For lovers of steam or electric or diesel, the recent auction was pretty much focussed on the railway genre, with probably over 95% of the sale items related to this hobby.

There were no big names and no outlandish items, it has to be said, but for those hobbyists intent on enhancing their collections, there was a great choice.

Skaledale buildings were in abundance on the day: an unmade bakery, menswear shop and garage realised £45; and the same money secured an off-licence, bay terraced garden wall and a barber’s. Just £30 was required for the steam shed while a pair of terraced houses and a bank sold for £55. Other building lots fell around £40-45 range.

Two, three-rail Hornby Dublo train sets went under the hammer, both realising £40. The Duchess of Atholl loco with two red and custard coaches and other stock sat in a tired box while a black Tank loco and assorted rolling stock looked to be equally good, albeit also in an ageing box. Bargain of the day was possibly the Tri-ang Railways Operating Coach and Ore Set which was still boxed although unchecked for completeness: £10 to you, sir.

On the big front, an O gauge Caledonian Railway 0-6-0 Tank three-rail loco with a centre pick-up fitted was bid to £85: it was not mint but looked to be serviceable. The O gauge GNR 0-6-0 Tank locomotive in pale green was better and also benefited from a central pick-up (£75) while the scratchbuilt O gauge (three-rail) GER Steam Tram Car was a bit of an oddity but clearly a labour of someone’s love: this sold for £50. Something of a loner was the Hornby O gauge tinplate GWR Tank with clockwork motor; it lacking its key and having clearly been enjoyed over the years, it was knocked down for just £20.