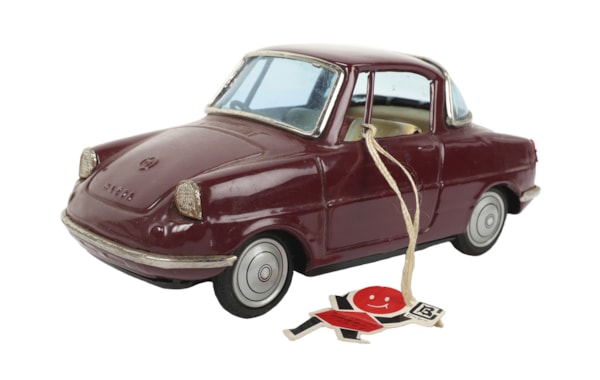 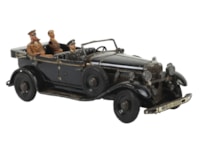 If you want a wide variety of great collectables, then look no further than C&T Auctioneers.

In my book, if you want a wide variety of great collectables, then look no further than C&T Auctioneers. Its last sale included a wartime-era Tipp & Co tinplate Fuhrer’s Mercedes; this superb clockwork vehicle containing two Hitler figures plus a driver, and in good overall condition, although the radiator mascot had gone astray. It raised £800.

Old was good: a pre-War B.G.L. Electric Speedway game comprised seven lead painted speedway bikes mounted on a revolving disc. Battery-operated (albeit untested!), this spectacle was designed to provide flashing and changing lights as the bikers raced around the circuit. Undoubtedly a rare survivor, it came with inner card packing and was described as being in very good original condition. It sold for £220. Meccano also fell into this category, when a pre-War No 2 Constructor Car, a boat tail two seater in blue and cream with red seats, appeared. A striking colour scheme and a working clockwork motor, with original key, together with a Meccano Liverpool transfer to the rear of the model, helped propel it to a finishing bid of £640.

The disparity between boxed and unboxed diecasts was exemplified by the iconic Corgi James Bond Aston Martin. This was the first issue, in gold; a good stand-alone example fetched £85 whilst £360 was the final bid on a boxed version with all the necessary accessories. In similar vein, a first issue Corgi Batmobile with leaflet, lapel badge and missiles didn’t hang around and closed on £460. A good deal more than that (£760) was required to secure the Walls Thames Ice Cream Van (No.447): with its correct special Corgi club leaflet/instructions and unapplied self-adhesive decal sheet, it was as (choc?) mint as they come.

If quirky was your forte, then the 7 inch long tinplate Bandai Mazda R360 Coupe in maroon probably ticked your box. With a tin printed interior and working friction motor, it even came with a Bandai shop tag. The bidding settled on £200.