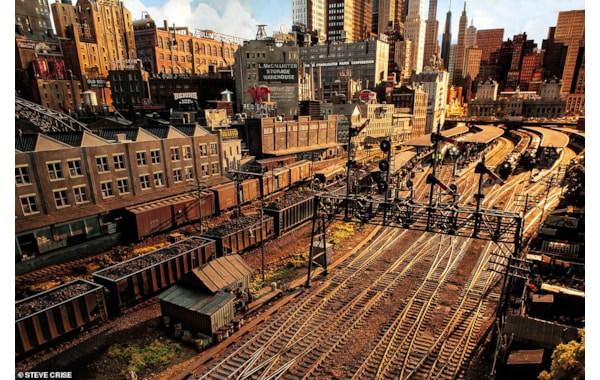 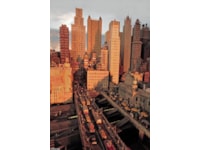 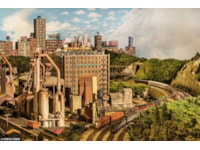 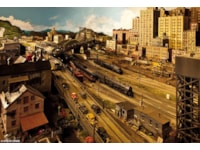 He has long been known as a model railway enthusiast, but now Sir Rod Stewart's legendary layout - 26 years in the making - can be seen for the first time in all its finished glory.

Called ‘Grand Street and Three Rivers City’, it also features a railway station crossed by numerous bridges at rush hour. There are period cars and lorries as well as trains, and it is all surrounded by lush landscape and dramatically lit in the colours of late afternoon sunshine.

Sir Rod said: 'It's the landscape I like. Attention to detail, extreme detail, is paramount. There shouldn't be any unsightly gaps or pavements that are too clean,' he said.

He was inspired by American railways because that is where he was living when he began the model in 1993. At the time, he had recently built a new house in Los Angeles and included an attic room specifically for the layout.
While life on the road as a rock musician and its temptations has led to many contemporaries going off the rails, railway modelling became an escape from the pressures of touring and Sir Rod would take kits, tools and paints with him and book an extra hotel room for a workshop so he could pursue his hobby in between concerts wherever he was in the world.

'We'd tell them in advance and they were really accommodating, taking out the beds and providing fans to improve air circulation and ventilation,' he said.

Many a skyscraper was completed that way on afternoons before a show, and he believes he may have never finished the diorama if he had not done so.