Northcord goes for gold with the premium Stagecoach livery 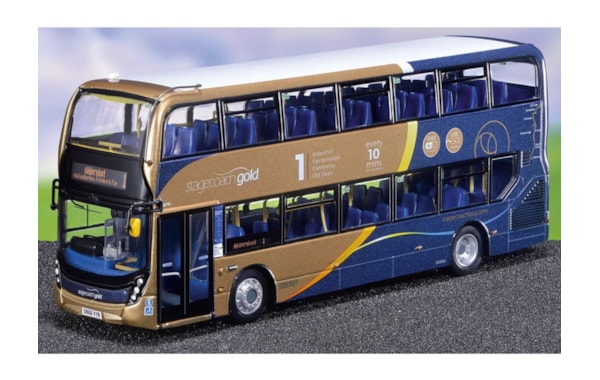 Following the significant success in launching the brand new casting of the Alexander Dennis Enviro400 MMC model in the liveries of National Express West Midlands, Stagecoach in Oxfordshire, Bluestar, Stagecoach West Scotland and Southern Vectis, Northcord Model Company is now releasing the eighth livery of its 10.9 metre, single-door casting as No UK6516 in the livery of Stagecoach South with full Gold branding for the famous route 1. UK6516 represents fleet number 10770 (SN66 VYR) that was new to Stagecoach South in 2017. 10770 carries a full Gold branded livery for the route, with a destination to Aldershot.

Printed graphics include “stagecoach gold” on all sides, “the regal route between Aldershot, Farnborough, Camberley & Old Dean”, and “every 30 mins Mon-Sat daytime”, with the prominent route number “1” on both sides and at the rear. Further additional details carried by the model include the free Wi-Fi and USB charging logos on both sides.

Stagecoach Gold is a luxury sub-brand used by various Stagecoach bus subsidiaries in the United Kingdom. Stagecoach Gold (originally Goldline) was launched in 2007 and was designed to attract more middle-class passengers to choose bus travel as a method of transport as well as to reward passengers on some busy and popular routes. Gold routes have a luxury specification and buses have stitched leather seats, metallic paint, special flooring and free Wi-Fi. In 2015, all brand-new Stagecoach Gold vehicles came equipped with USB charging facilities underneath every seat that enabled passengers to charge their mobile devices whilst on-board. The following year, Stagecoach took the delivery of the first Stagecoach Gold branded Alexander Dennis Enviro400 MMC and Enviro200 MMC vehicles. The liveries on the new buses remained the same as the previous model however Stagecoach slightly modified the interior with new wood effect flooring and updated the upholstery with new style leather seats that incorporate a cream coloured headrest.

The Alexander Dennis Enviro400 MMC No UK6516 is a one-piece casting with clean lines that accentuate the square, gasket-mounted windows and livery application. Another main feature on the model is its single tree protector at the front. The front dome on the model is significant, with curved windscreens on both upper and lower decks.