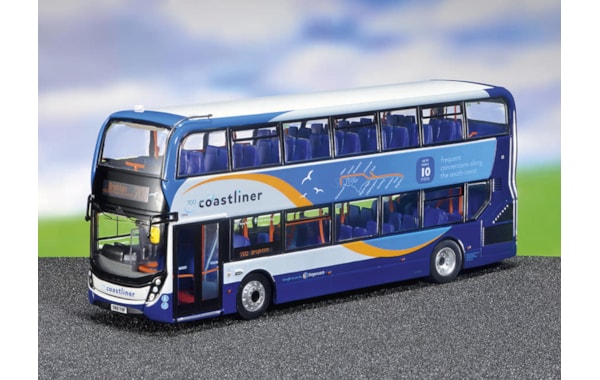 Following the significant success in launching the brand new casting of the Alexander Dennis Enviro400 MMC model in the liveries of National Express West Midlands, Stagecoach in Oxfordshire and Stagecoach West Scotland, Northcord Model Company is now releasing a new variation. It sees the eleventh livery of the 10.9 metre long, single-door casting – in the colours of Stagecoach South, with full branding for route 700 coastliner, as No ukbus 6520.

Representing fleet number 10942 (SN18 KNF) that has 10.9 metre, single door bodywork and was new to Stagecoach South in 2018, it carries a full, branded livery, showing the destination to Brighton. The special, comprehensive livery and branding are fully replicated on the model. The stand-out features of the branding are “free WiFi, USB charging” and the full route map with the name of every main stop “Portsmouth, Hilsea, Havant, Emsworth, Chichester, Wick, Bognor Regis, Littlehampton. Worthing, Shoreham, Hove, Brighton”, “frequent connections along the south coast” on both sides, “up to every 10 mins” and “700 coastliner” on all sides (except the front), “Great value travel between Littlehampton, Worthing & Brighton” and “only £23 a week 7 day megarider gold ticket” on the rear.

NMC’s Alexander Dennis Enviro400 MMC is a one-piece casting with clean lines accentuating the square, gasket-mounted windows. All logos and lettering are clearly legible throughout the livery. Another main feature on the ukbus 6520 model is its single tree protector at the front. The front dome on the model is significant, with curved windscreens on both upper deck and lower deck.

Northcord Model Company is also creating new design standards within the interior of both saloons. These features, inside the compartments, will represent the real, outstanding layout of the Enviro400 MMC, such as the extensive portrayal of handrails on upper deck and lower deck.

Available through John Ayrey’s for wholesale enquiries (www.ayrey.co.uk), or contact your usual retailer.