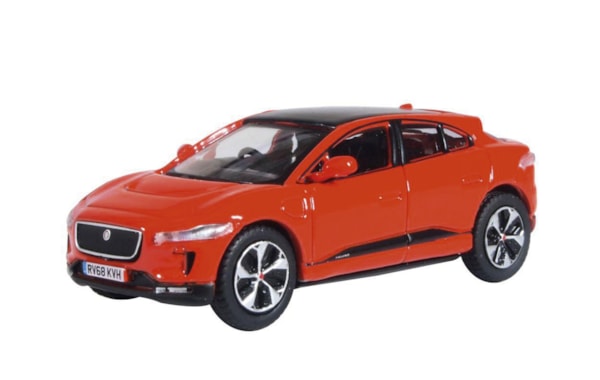 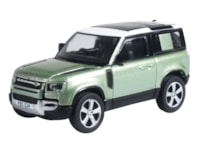 Further to announcements made recently, two examples of the 1/76 scale new tooling are now on sale and look superb. Oxford has teamed up with Jaguar Land Rover for both models - the Jaguar I-Pace and Land Rover’s new Defender 90.

JLR launched the I-Pace in 2018, styled as a battery-electric crossover SUV. Designed by Ian Callum and assembled by JLR’s contract manufacturer, Magna Steyr, in Austria, the concept car was unveiled at the 2016 Los Angeles Motor Show, with a road version seen in London, in March the following year. Sales markets so far include Europe and North America and the five-door coupé represents the first electric SUV from a top European manufacturer. The concept has seen Jaguar Land Rover winning many international awards including European Car of the Year, for the first time ever, and World Car of the Year, both in 2019. It has also won Best Design and Best Green Car awards, which altogether represent a so far unequalled achievement for one car.

In bright Photon Red, with black roof and exterior trim, and highly detailed silver and black wheels, the interior is also black and Oxford’s first Jaguar I-Pace is registered RV68 KVH, from 2018. The modern red Jaguar badge is embedded into the black radiator grille with the usual classy Jaguar leaping across the boot. Model code is 76JIP001, and it is priced at £7.95.

Land Rover’s new Defenders are being made in the company’s plant in Slovakia, although the vehicle has been designed by Jaguar Land Rover’s UK designer, Gerry McGovern.  Naturally, the technology, capability and performance are incredible. The new Defender has been engineered to comply with global car regulations with just under 130 potential markets, notably China and the USA. The car shares no component or technology with previous Defender models and will appear with permanent all-wheel drive, locking differentials and a ZF 8-speed automatic transmission.  The new models will also have an aluminium unibody instead of a body-on-frame construction.

The new Defender 90 is the three-door, short wheelbase model with a slightly lower specification but also a lower price tag than its two new stable mates, starting at £40,290. It has a maximum speed of 109 mph, with acceleration of 0-60 in 9.6 seconds, and an initial choice of a 196 bhp 2.0 litre 4-cylinder turbo diesel engine with a fuel consumption of 32.2 mpg.  A petrol hybrid engine is also an option. The Defender 90 will come with the option of coil springs or the air suspension of the 110. However, so many luxuries come as standard on the Defender 90 too -LED headlights, heated seats and steering wheel, and 18” steel wheels with Diamond Turned  finish.

Oxford’s 1/76 scale  replica of the new Land Rover Defender 90 makes its debut in Pangea Green,  with registration  PBS 534. It features a high-gloss white roof and black interior. Trim is finished in both black and silver, and a spare wheel is fixed across the rear door. The front grille is black with silver lower section whist the silver lower rear panel houses the rear number plate. Product code is 76ND90001 and the price is, again, £7.95.