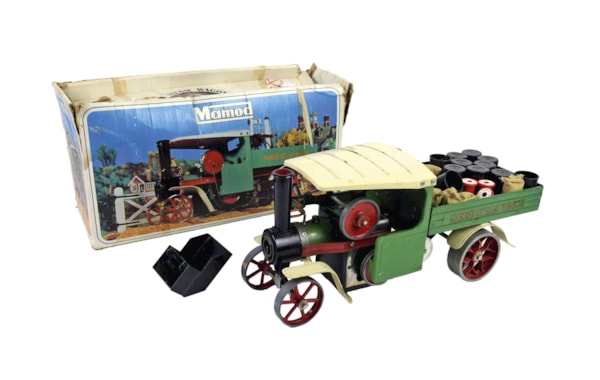 The first category presented a feast for the collector: at the bargain end of the scale was a Mamod precision live steam wagon SW1, finished in the usual green livery, but which was with a slightly tatty box. In good condition with a load of sacks and barrels, it steamed off to make £75, slightly over estimate.

For those who preferred stationary engines, Germany was represented by a very clean and tidy Wilhelm Schröder GmbH & Co (Wilesco) D24 model live steam engine, also boxed, although it was not known if the model was functioning: this closed on £110. Several other lots featured stationary engines from this celebrated manufacturer who has been in business a long time.

Steam tipped over on to the rail scene at the auction: a scratchbuilt, live steam model locomotive, with a brass finish, and about 14cm high, was mounted on a section of rail track and sat on a plinth. This was a charming (one-off?) model, and it sold for a modest £80.

Of interest to the model figure collector was lot 1057, which comprised the Airfix Sahara playset, American Wild West Series cowboys, Britains and Deetail American Civil War figures, some Timpo Action Models and associated items. Many were boxed and still in their original cellophane: estimated at £100-200, this varied finally lot sold for an amazing £1,500.

As for those diecasts, one of the best examples was the Corgi Major Toys Gift Set No. 1 Carrimore Car Transporter with four cars, namely a Rover 90, Jaguar 2.4, Austin Healey and an M.G.A.  Despite the box’s imperfections and the playworn character of both the cars and transporter, it still made a useful £200 for the seller.

29 May 2020
Tweets by Collectors Club Of Great Britain