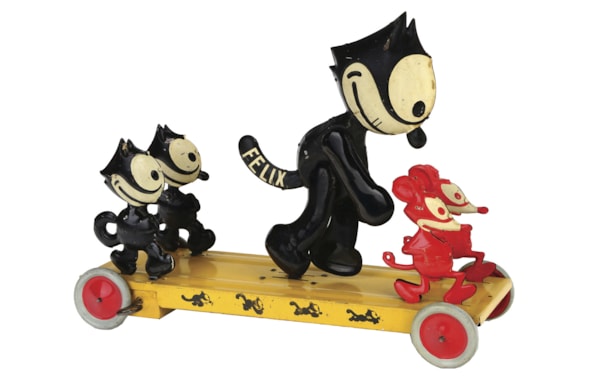 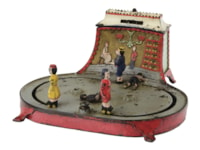 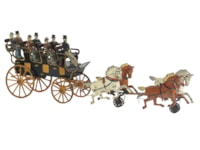 Pristine toys from some of the world’s finest collections will cross the auction block at Morphy’s on 10-11 March. More than 1,260 lots will be offered, including over 150 American tin toys, 100 still and mechanical banks, a fleet of more than 150 cast-iron cars, trains, and hundreds of coveted character and Disney toys. The lineup continues with more than 1,000 fine German tin toys, as well as robots, a sensational array of antique European automata, and a broad selection of horse-drawn cast-iron, Japanese, and pressed steel toys.

Jeff Landes began collecting toys in 1975 during his surgical residency in Philadelphia. His first acquisition – an impulse buy made while on vacation – was a Chein Handstand Clown. That purchase launched a 30-year quest for comic character toys at shows, auctions, and antique markets. Throughout his collecting odyssey, Jeff set his sights on locating the finest available examples, preferably with their original boxes, and upgrading whenever possible. Now retired, Jeff has decided to downsize and share parts of his fantastic collection with his fellow enthusiasts.

Gordon Lankton is a distinguished mechanical engineer, US Army veteran, and chairman emeritus of the plastics manufacturing company Nypro Inc. Fascinated by antiques and collectables since childhood, Gordon stepped into the toy-collecting world with the purchase of an Arcade Model ‘T’ Ford with a rumble seat, a replica of his actual first car. With an appreciation of all sorts of toys, from vehicles to wind-ups to bell-ringers, Gordon eventually amassed a collection of well over 1,000 pieces, which will now be enjoyed by new owners bidding at Morphy’s.

Any top-notch collection of early comic character toys starts with the magical name of Disney. At Morphy’s March toy event, collectors can expect to encounter wall-to-wall mice – the upscale type that no one would shoo out of their kitchen. An extremely rare tin wind-up five-finger Mickey Mouse made in Germany for the English market stands an impressive 9 inches tall and has moving pie-eyes and an opening mouth. Extraordinarily rare, this irresistible treasure from the Landes collection is estimated at $20,000-$40,000.

A Disney favorite that most collectors might only dream of due to its rarity, a Lionel Mickey Mouse Circus train set in its original box includes a composition Mickey Mouse “barker” figure, key-wound Lionel Lines engine, tender with Mickey Mouse “stoker,” and cars emblazoned with numerous Disney characters. Unbelievably clean and original, its cardboard segments and tickets are unpunched, and all accessories are present. One of few unpunched sets in existence, it is estimated at $10,000-$20,000.

Where mice play, can cats be far away? Not in a comic character collection, because it wouldn’t be complete without Felix and friends. Leading the cat-and-mouse parade in the Landes collection is a large (14in long x 11in high), very rare J. Chein “Felix Frolic” toy comprised of a wheeled platform with a central Felix figure, two smaller Felix figures, and two snouty red mice completing the entourage. It is one of only four known examples, all likely to have been made in 1926. Estimate: $20,000-$40,000

More details about these lots, and the auction as a whole, can be found at www.morphyauctions.com