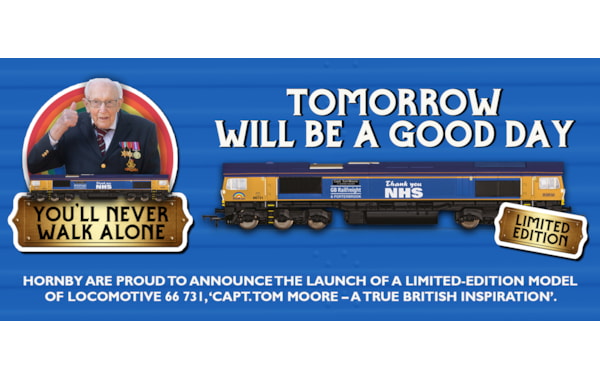 As we reported last week, Hornby has been inspired by the achievements of the amazing Captain (now Colonel) Tom Moore and were pleased that GB Railfreight, Porterbrook and Neil Booth of Railwayana Auctions teamed up to create a special livery on one of GB Railfeight’s Class 66 locomotives.

As a special thank you to not only Col. Tom Moore and the NHS, but also to GB Railfreight, Hornby are proud to announce the launch of a limited edition model of locomotive 66 731, ‘Capt. Tom Moore – A True British Inspiration’.

When Hornby first launched this model on Thursday 30th April, it had initially planned to produce just 500. This quickly leapt to 1000 as reaction grew, and by the end of the evening that had risen to 1500. The next morning it was obvious that they needed to increase the number to 2000 but, even this was not enough to meet the demand, so the quantity rose to 2500.

However, as the demand continued to climb as collectors wanted to get their hands on this special edition, 2500 became 3000 and by late afternoon that number had again risen to 3500... which will generate an incredible £140,000 donation to the NHS Charities Together organisation

:As a company we were astounded by the kindness and generosity of those who had ordered the model," Jaimie Gilham, from Hornby told us, "especially as we had originally stated it as a limited rdition of 500. It became clear very quickly that the model will still be a limited edition but limited to 3500, due to the kindness shown by those purchasing the model and therefore contributing to the NHS Charities Together."

"As a company we have never experienced such a reaction that the launch of this model has created, which only serves to illustrate how passionate we all feel about the dedication and in some cases the ultimate sacrifice that all those that make up our NHS continue to perform and for which we all thank you."

Just 3500 of these limited edition models are to be produced and were sold exclusively via the Hornby website.