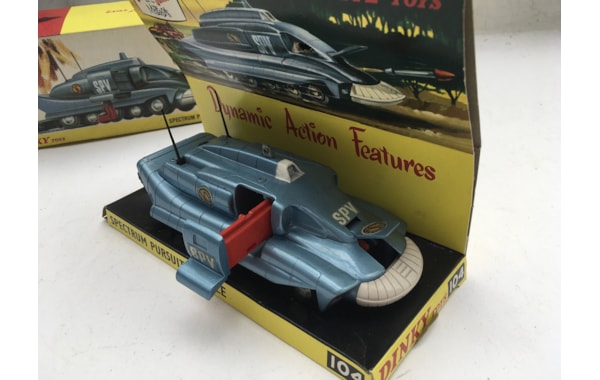 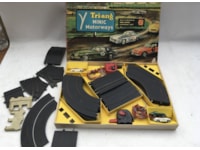 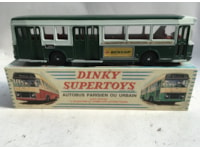 there was also Action Man, cinema posters, trading cards and pretty much everything in between. A good number of the diecast lots comprised several items: these ranged from unboxed and playworn to mint in box condition.

An exception was a Tri-ang Minic Motorway set, reference M1522, that sold for £65: the boxed set came with some extras but importantly retained the three cars. In good condition, it represented an excellent purchase for someone.

A bid of £180 was enough to secure a very attractive French Dinky Parisian Urban Bus: this was finished in dark green and bore suitably period advertising. The box artwork was also something of a selling point. Elsewhere, in the bargain basement, a Tri-ang Ocean liner, electric powered and bearing the title of RMS Orcades, was boxed but requiring restoration: this realised £30. It was good to see a Corgi VW Rally Beetle with charging rhino appear (£150) as well as Gift Set 17, the Land Rover towing a sharknose Ferrari (£180), although both were eclipsed by the Budgie Toys Supercar with Mike Mercury: this soared off to realise £240, but it was boxed and whilst not perfect, was still very presentable. The Dinky Captain Scarlet Spectrum Pursuit Vehicle just outbid this Anderson item at £260.

Dolls were also sighted at the event: £170 was the winning wager on a pair of Barbies. These were straight legged, the fringed redhead marked 1962 by Mattel, and wearing a Fancy Free 1963 outfit. The other sported fair hair, and was attired with an American Airlines stewardess outfit from 1961. Importantly, both carried their appropriate bags!

Amongst a colossal amount of HO/OO model railway locomotives and rolling stock (where does it all come from?), a boxed Crescent diecast green footbridge with platform stands was well worth the £45 bid on it, for it contained a number of destination (station) boards. Even less (£40) secured a lovely wooden Billings model of a Mississippi paddle steamer. At 60 centimetres long, it featured plenty of detail and the bonus was that it was presented in a glass display case (which would have cost the bid price alone). Other BiIllings boats were featured but not all sold. The Tri-ang set of ten Waterline models did find a new home, though; these 1/1200 scale models were all boxed and achieved £150.

One of the more curious lots had to be the example from In the Past Toys’ War Criminals of the 20th Century: the 12 inch model of Hitler was boxed and was taken away for £130. Other baddies are available…