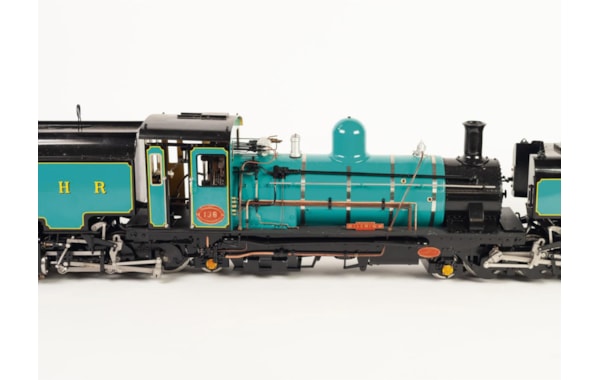 The Capes Dunn auction in Heaton Mersey certainly served up the goods in terms of large scale railway models.

An Accucraft boxed gauge 1 live steam model of a 2-4-0 Tank loco No.6 (Pevril) in Isle of Man brown livery stood out; butane powered with a remote control, it made £950. This was eclipsed by the Accucraft gauge 1 live steam L&B Baldwin 2-4-2 Tank loco (Lyn - No.762) that was finished in Southern green livery; again butane fuelled, this steamer raised £1,200.

Rather less was the Accucraft gauge O live steam 0-6-2 Tank loco in green and black, which sold for £600; while a Roundhouse Engineering O gauge live steam 2-6-2 Pannier Tank loco attracted plenty of attention, this finally settling on a bid of £2,400. However, pride of place at the event went to the Accucraft O gauge live steam MS00723 of an NG16 GARRETT 2-6-2 and 2-6-2 loco, named Edison Green. Numbered 138, resplendent in green and black livery, powered by butane and with all accessories, it was as new: a wallet-thinning £3,400 was needed to take it home.

On to the real relics: a number of wagon and locomotive plaques also went under the hammer, with prices ranging from £80 up to £1,300. A brass locomotive whistle of the organ pipe type made £70 and there was an interesting 19th century oak-cased circular wall clock for Manchester, South Junction and Altrincham: this sold for £160.

In terms of playthings, a Chad Valley (Wee-Kin) spring-driven diecast metal milk delivery lorry with a load of eight churns wasn’t mint (a stay was missing) but did have its key: this sold for a bargain £20.
From Germany, the Bing tinplate gramophone (ask your grandparents!) was of pre-war manufacture. The Pigmyphone featured a silver-painted conical horn and a record for playing. Accompanying this lot was a pre-war tinplate cooker and a mangle and bowl from the same era. The ensemble raised £60.