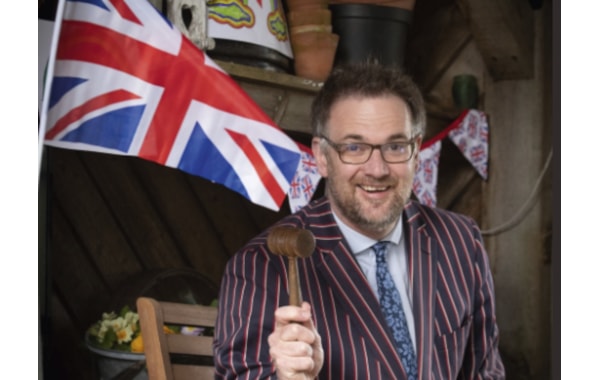 Hanson raised £30,000 for the NHS by selling his famous gavel and other items in an online auction

Every penny will be donated to Derby and Burton Hospitals Charity Covid-19 Appeal.
The top seller was a day out salvage hunting and antique shopping with Drew Pritchard, which fetched £3,700. His iconic cap brought in another £480.

Charles raised £1,770 with his BBC Bargain Hunt goodies, his own gavel, tea for four in his garden shed and a VIP day out at Hansons Auctioneers.

He said: “I’m very proud we managed to make so much money for our amazing health service workers fighting this terrible disease on the front line. It’s yet another sign of the nation’s deep respect and admiration for them”

“As soon as I revealed my charity shed auction idea I was overwhelmed by the response. Friends from the TV world, members of the public and colleagues from my firm, Hansons Auctioneers, were swift to help”.

“We had so many offers of lot donations we simply couldn’t accommodate them all. It was tough to co-ordinate an online sale so quickly, and to run it from my garden shed was a major technical challenge, but I was determined to make it happen – and happen fast – because our NHS heroes need help now. It was fun, it was exhausting, it was different and I just hope everyone who was watching or taking part on our bidding platform Hansonslive, Facebook or Twitter enjoyed the fun.”

“My deepest thanks go to everyone who supported the event in any shape or form and also to the NHS staff who inspired us all to go the extra mile for them, just like they do for us.”

A day out metal detecting with Adam Staples, who helped to uncover a coin hoard potentially worth £5 million in Somerset, soared to £2,100. An auctioneering lesson from auctioneer and TV antique show favourite Charlie Ross raised £1,700. Finally, a tour around Derbyshire’s Chatsworth House for up to six people accompanied by the Duke of Devonshire was snapped up for £1,550.